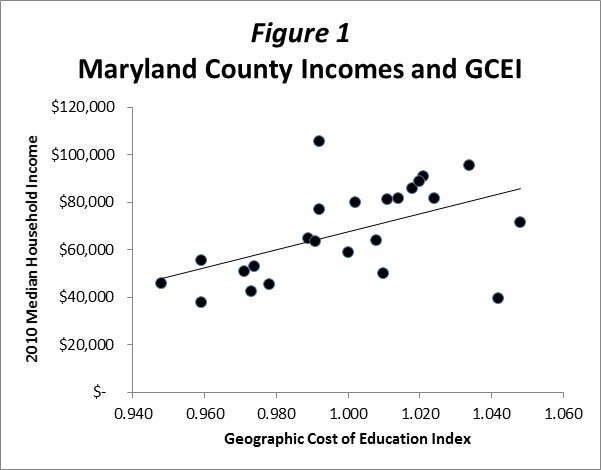 GCEI: Alms for the Rich

Maryland styles itself as a progressive state. But Maryland is really a plutocratic state, with the wealthiest areas dominating state politics and electing ostensibly progressive politicians who redistribute wealth and power upward from lower-income areas to higher-income areas.

So how can Marylanders rectify their “progressive” ideals with those regressive, plutocratic policies? One way is to hide the policies’ purpose behind clever names. Hence, the “Geographic Cost of Education Index” provision (GCEI), which redistributes state education money to wealthier school districts.

The GCEI was adopted as part of the 2002 Thornton “Bridge to Excellence” school funding legislation. The GCEI’s purpose is to “provide additional State education aid to certain ‘high cost’ jurisdictions,” as explained in a recent Maryland Association of Boards of Education document. To determine who gets aid and how much, the GCEI is calculated using an index generated from data intended to capture the cost of living, “livability” and “working conditions” in Maryland’s school systems.

That sounds all well and good, until you realize that a community’s “cost of living” is usually a factor of that community’s wealth, with rich neighborhoods having higher costs of living. Figure 1 shows a scatterplot of the median income and GCEI[1] of each of Maryland’s 24 school districts (the 23 counties and Baltimore City). Notice the positive slope of the linear trendline, showing the GCEI’s regressiveness. Only Baltimore City is a real southeast outlier to that trend, and arguably should receive a GCEI subsidy. (Harford is the northern outlier.)

Maryland governors were hesitant to fully fund GCEI during last decade’s tight state budgets, instead funding it at either 0 or 50 percent. New governor Larry Hogan proposes to return to 50 percent GCEI funding in his FY 2015 budget. Needless to say, he’s being criticized for that, and there’s a legislative movement to make full funding of GCEI nondiscretionary.

Hogan should instead zero out the GCEI and the Maryland General Assembly should repeal the provision. If the richest counties in Maryland—which are some of the richest political subdivisions in the world—can’t pay their fair share of their children’s education, how can they conscionably demand that the poorer parts of Maryland subsidize the rich counties’ school systems?

[1] The GCEI values used in Figure 1 are from the original index, calculated in 2006. The GCEI was to be recalculated in 2009 and 2012, but my cursory reading of the legislative history suggests the state is still using the 2006 index to calculate the subsidies. Prima facie, I suspect updated GCEI values would have been even more regressive, as house prices outside of Maryland’s richest counties took a severe hit from last decade’s housing bubble collapse.