Join top elected officials, business executives, and engaged citizens for a high impact discussion on the most pressing issues heading into the 2019 legislative session. Just two months after an historic election in Maryland, the summit will feature top government decision-makers and business influencers who are driving critical decisions on redistricting, public education spending, and business tax reform. The summit is sponsored by the Maryland Public Policy Institute - a leading nonpartisan public policy research and education organization in Maryland. 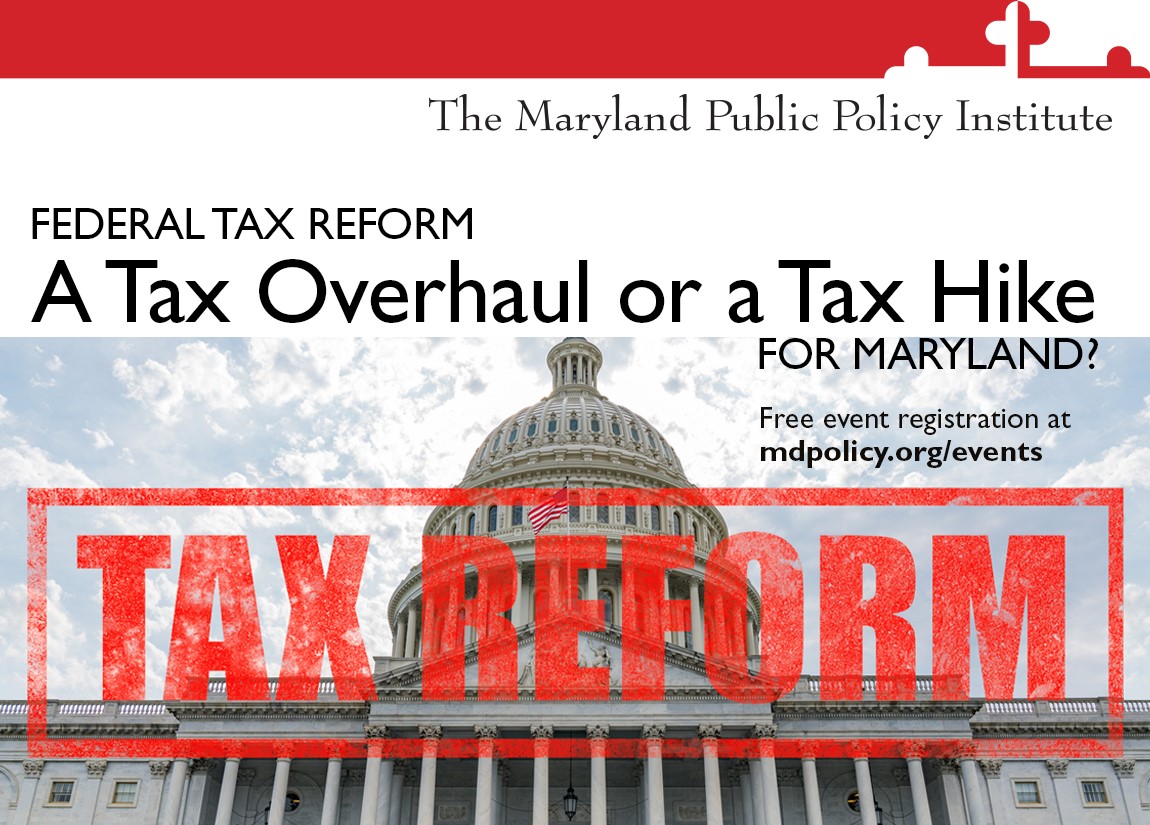 The Maryland Public Policy Institute invites you to a special discussion on federal tax reform with The Honorable David Brinkley, Secretary of the Maryland Department of Budget & Management and Joseph Bishop-Henchman, Executive Vice President of Tax Foundation.  A recent study estimates that more than a quarter of Marylanders will owe a combined $400 million more in taxes under the new federal law.

Join top elected officials, business executives, and engaged citizens for a high-impact policy orientation on the most pressing issues heading into the 2018 legislative session. With less than a year before Maryland’s next election, the summit will feature government decision-makers and business influencers who are driving critical policy decisions across the state. The summit is hosted by the Maryland Public Policy Institute - a leading nonpartisan public policy research and education organization in Maryland.

Money Bail in Maryland: Should it stay or should it go?

On February 7, 2017, the Maryland Court of Appeals adopted a landmark rule to end the practice of holding criminal defendants in jail before their trial of they cannot afford bail.

The Maryland Public Policy Institute has already influenced the conversation over bail reform with a widely-read and shared op-ed, published in the Washington Post, in December 2016. 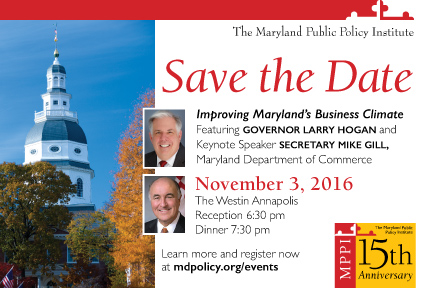 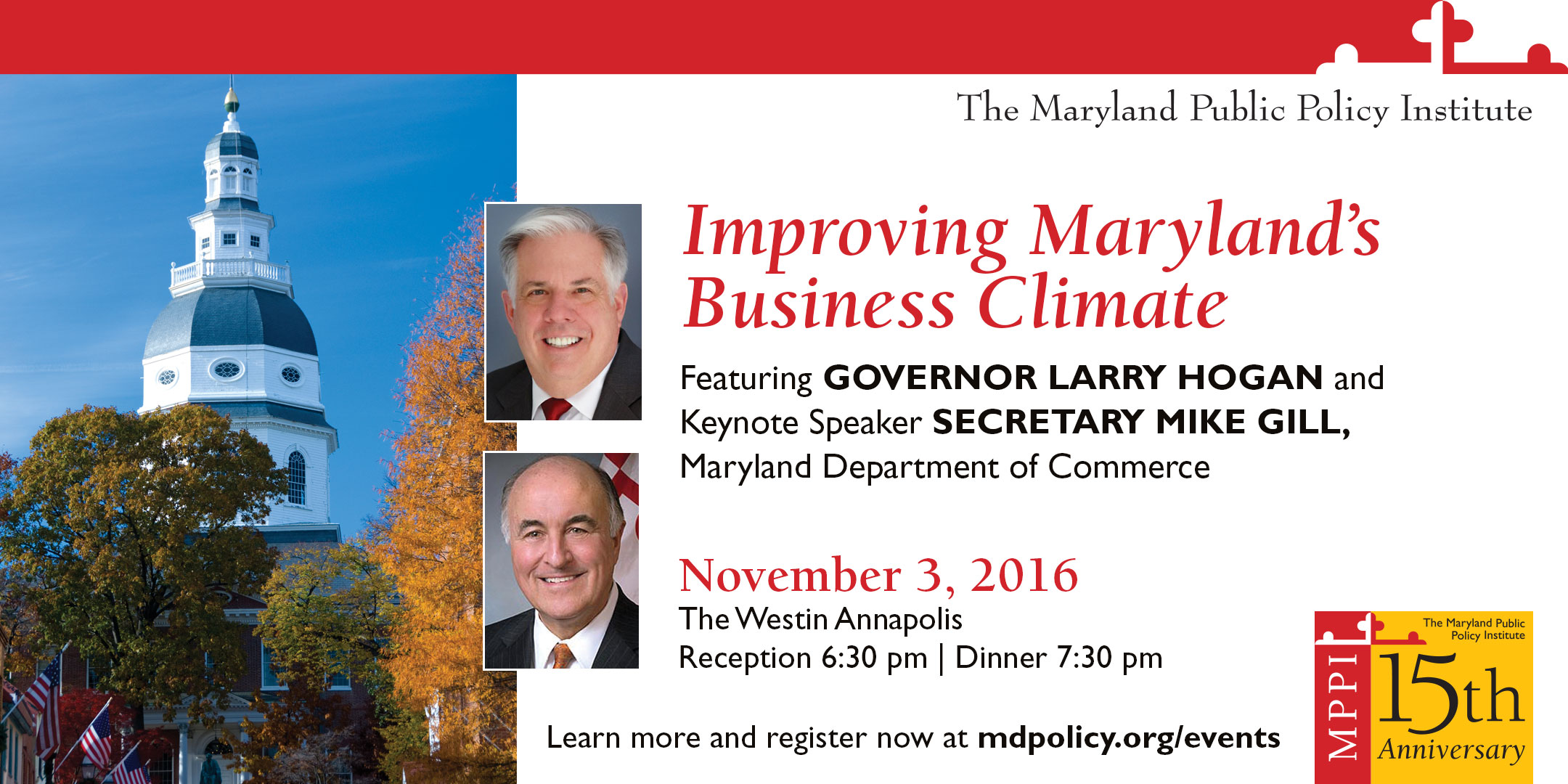 To celebrate its 15th anniversary, the Institute will bring together top policymakers, business leaders, and citizens to shine a light on improving the business climate and economic growth in Maryland.

EVENT: The Baltimore City Property Tax: How much should we cut?

Almost everyone agrees that Baltimore City’s property tax rate – roughly twice that of any other jurisdiction in Maryland— is an obstacle to the city’s renewal and its efforts to attract new residents and create greater economic opportunity.

What few can agree on, however, is how much the city needs to cut its tax rate to be competitive, how to achieve such cuts, and where they should be targeted. Current public policy offers tax breaks for developers to promote building. Critics say breaks should be extended to all residents. Still others say targeted rate cuts for families or newcomers or requiring nonprofits, who don’t pay property taxes, to start would encourage more people and businesses to move to the city.

At the Maryland Policy Forum, we think the way to find the best public policy solution to Baltimore City’s tax problem is through vigorous debate. And we know a thriving Baltimore City benefits everyone in the state in terms of higher tax revenue and lower subsidies. Don’t miss the free debate central to the city and state’s future.

EVENT: A Better Way to Restore the Chesapeake Bay

The Maryland Public Policy Institute will host the panel discussion: A Better Way to Restore the Chesapeake Bay, a policy forum on the most sensible policies for addressing Chesapeake Bay pollution and the health of the Bay.

Maryland officials expect to spend over $14 billion in the next decade to meet EPA pollution mitigation targets for the Chesapeake Bay by 2025. Yet Maryland has pointedly ignored a single, enormous source of the pollutants—the massive amount of water-scoured sediment and trapped nitrogen and phosphorus behind the Susquehanna River’s Conowingo Dam. Periodic discharges from the dam, such as the one following Tropical Storm Lee in 2011, spill enormous amounts of sediment and nutrients into the Bay, dwarfing the most optimistic cleanup targets that have been set for the watershed.

What should Maryland do to reduce Chesapeake Bay pollution, and is current policy too much or too little?