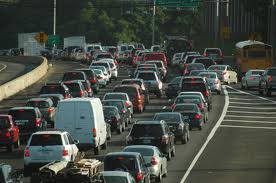 There is unexploited public sentiment in the Washington area Maryland suburbs in favor of big projects to relieve traffic congestion according to a major new survey of public opinion. The margins in favor of widening major suburban Maryland highways with express toll lanes and building a new bridge over the Potomac north of the American Legion Bridge range between four-fold and seven-fold. The public favors heavy investment in maintenance and rehabilitation of the Metrorail system, but opposes any extensions.

The survey of 800 randomly selected residents of the greater DC area was conducted recently by OpinionWorks LLC for the Northern Virginia Transportation Alliance (NVTA) and the Suburban Maryland Transportation Alliance (SMTA.) It found little support for ‘green’ fatalism about traffic congestion or for any transit/biking-only approach. Traffic and transportation is seen as the greatest long-term challenge to the region by 33% of respondents versus the economy & jobs 10%, crime 5%, terrorism/security 5%, ‘overdevelopment’ 4%.

Among transportation issues reducing traffic congestion and delays is seen as “the most important” by 47% compared to 17% who favor “providing more transportation options,” a green refrain. Adding new express toll lanes to I-270 is favored by 70% to 10% opposed. Strong support is 47% versus only 5% in strong opposition to 270 lane additions. Frederick County support is 89% with 64% favoring strongly and 11% total opposition. In Montgomery County support is 72% against 13% opposition. There is more Republican (82%) and Independent (72%) support than Democrat but at 67% support for a wider 270 support still substantially outnumbers naysayers.

There is similar overwhelming support for extra lanes on the American Legion Bridge, and the Maryland portion of the Capital Beltway. On a new bridge crossing of the Potomac upriver of the Legion bridge there is an unusual number of “neutral” and “not sure” (30%) probably because the project gets little media. But those favoring 59% compare with only 11% opposed. Support is greatest in Montgomery Co itself at 68% to 12% opposed. Again Republicans margin of net support is larger but among Democrats in Montgomery Co 53% support the new bridge to 13% against it.

There is also support shown for the Purple Light Rail and Corridor Cities Transitway, and for 8 car trains for Metrorail.

A more general question found 84% support both road and transit improvement, 9% roads-only, 6% transit-only. At 15% the ‘green’ approach is rejected by most.

Only 27% favor extending Metrorail compared to 67% who want system reliability and maintenance emphasized. The conservative approach to Metrorail is stronger in Maryland (75%) than in DC (67%) and Virginia (60%) and this feeling is strongest of all in outer counties (Frederick 87%, Charles 87%). The conservative approach to rebuild rather than build further is shared by frequent and infrequent users alike, and by Democrats and Republicans, though again there is larger minority support for extensions of Metrorail by Democrats.

On the northern Virginia side of course they have been building megaprojects while Maryland has - apart from the ICC - been thumb-twiddling. But NoVA’s present major projects — widening I-66 with toll lanes inside and outside the Beltway and the Bi-county Parkway - have public support also, but by much lesser margins than Maryland’s projects. I-66 widening inside the Beltway for example has 48% support to 33% opposition, and the strong opposers (21%) almost match the strong supporters (23%.)

A key issue of course is how these megaprojects are to be funded. People express a general willingness “to pay a little more” for transportation improvements - by 60% to 36%. But go to specifics for overall funding and there is moderate net opposition to every measure:

SMTA comments: “While none of these options receives majority support today, the margins are close enough that several of these options could prove politically viable if voters were provided with information about specific improvements the new revenue would enable. Based on past research, it would also be persuasive to voters if they knew that funds raised would be spent only for transportation purposes, which is now a constitutional protection in Maryland since passage of the 2014 ‘lock-box’ amendment.”

Rich Parsons vice-chair of the SMTA concludes: "There are solutions to our traffic problems, and the public clearly and overwhelmingly supports them.”