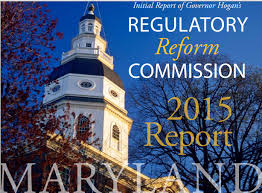 This week, the Maryland Regulatory Reform Commission, set up to improve the state’s notoriously poor business climate, released its final report. The commission found a number of obvious reforms that would cut unnecessary red tape and make starting and running businesses simpler, cheaper, or otherwise less burdensome. The commission should be applauded for its work in assembling this valuable report.

On reading it, I was pleased to see that some of the regulations I noted as particularly problematic in my comment to the committee were included in the reform proposal, particularly those relating to occupational licensing. They note that the state issues over 400 permits and licenses, and recommends that the state undergo a comprehensive review of licensing. Moreover, it recommends consolidating a number of license categories (such as combining licenses for drywall and painting contractors), and make the licensing process shorter and less onerous, while eliminating a number of “nickle-and-dime” type fees of less than $25. To top things off, the report recommends a comprehensive review of continuing education requirements for licenses, a recurring theme among practitioners who spoke at the commission’s regional meetings.

I was also pleased to see the commission received broad support for the creation or expansion of one-stop shops for state business licenses. The report asks that the state designate a lead agency for each type of permit review, and most importantly, to do so “even if it requires elimination of review by some agencies interested in the same issues.” Removing layers of government review for permits is what makes one-stop shops more useful than the status quo. The so-called “Devens model” permitting reform, championed by world-leading land use economist Edward Glaeser, works because permit reviewers have vastly expanded powers to approve projects. Colocation of permitting offices is not particularly useful if the number of steps to achieve a needed permit is not reduced.

The report also spends the bulk of a page making the case for the adoption of expanded electronic documentation and filing of paperwork in all state agencies. “In this day, there is no reason that electronic submissions, as opposed to paper filings, should not be accepted across the board.” While the paperwork load should be decreased by deregulation, making paperwork filing easier would be a valuable step, and notably reduce the compliance burden on many of Maryland’s budding entrepreneurs.

The commission also recommends rationalizing a number of regulations that place an undue burden on small entrepreneurs. Members of the public noted that rules relating to wineries and food trucks are overly burdensome and make little sense for these unique types of businesses even if they may be reasonable for typical restaurants.

Finally, the commission noted a few big-picture items which should be closely examined by the administration and the legislature. State procurement should be consolidated and updated, which would lead to taxpayer savings on things like IT and housekeeping expenses. The report outlines improved customer service standards in state agencies, which could be implemented via executive order. Most notably, the report calls for a top-down review of the state government’s structure to eliminate duplicative responsibilities, explaining that it has been 45 years since the state’s last major reorganization.

While the report made a number of sound recommendations, the committee could have gone further. A coming post will include a number of further reform suggestions.