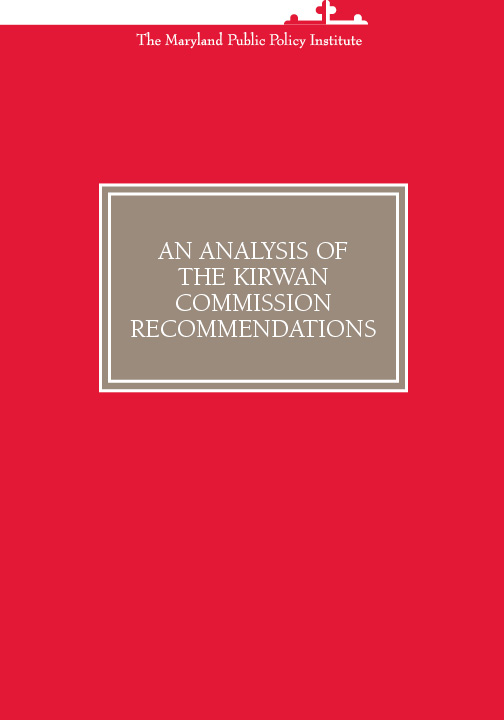 An Analysis Of The Kirwan Commission Recommendations

From 1998 to 2014, Maryland public schools increased spending on operating expenses by $6.47 billion—an increase of $3.8 billion in inflation-adjusted dollars. If the state follows the recommendations presented by the Kirwan Commission, a statewide panel that is reevaluating Maryland public school funding, taxpayers can expect to see education spending continue to increase at a rapid rate in the years to come.

The commission has called for an expansion of pre-K programs, increased teacher pay, more rigorous certification requirements for teachers (including pre-K teachers), and a series of other reforms and initiatives. The exact cost of the commission’s recommendations is unknown at the moment but will likely require billions more in funding for Maryland’s public schools.

The Maryland legislature established the Commission on Innovation and Excellence in Education in 2016. The Commission, comprised of 25 individuals appointed by various policymakers and education organizations, is also called the Kirwan Commission in recognition of commission chair William E. (Brit) Kirwan, who was chosen by the governor, senate president, and house speaker. Other members of the committee include Chester Finn, appointed by the president of the state board of education, and Elizabeth Ysla Leight, appointed by the Maryland PTA.[1]

Lawmakers established the commission for two reasons. First was to “review the findings of the Study on Adequacy of Funding for Education in the State of Maryland.” [2] In 2000 and 2001, Augenblick, Palaich and Associates conducted an adequacy study for the state. The report provided suggestions for revising the state’s funding system. Following the release of the report, the legislature passed the Bridge to Excellence in Public Schools Act 2002. That legislation led to a new funding formula and a significant increase in education funding.

The second task of the commission was to “provide recommendations on preparing students in the state to meet the challenges of a changing global economy, to meet the state’s workforce needs, to be prepared for postsecondary education and the workforce, and to be successful citizens in the 21st century.”[5] To date, the work of the commission has fallen mostly in this second category. In January 2018, the commission released a preliminary report calling on the state to develop initiatives in five key areas:

The report did not call for a specific level of funding, but given the policies recommended in the report, the cost will be substantial.

The Commission’s report suggests that if Maryland were to adopt the policies outlined in the commission’s report, such as expanded pre-K programs and increased learning standards, the state’s educational achievement would rise to the levels of both Massachusetts and top-performing countries.[6] Unfortunately, the report provides few, if any, citations of the actual efficacy of these suggestions. Given the scope of the recommendations in the report and the immense cost that is sure to follow, it is important to examine these suggestions with a critical eye.

First, this report examines current trends in spending and their impact on policy decisions, showing how Maryland compares with other states in the nation in terms of spending.  The focus will be on trends in inflation-adjusted dollars. Next, we examine some of the Kirwan Commission’s recommendations. Because of the breadth of the recommendations, which range from birth through college, we will not address each one. Rather, we summarize the major points of each section and offer clarity and questions on specific recommendations. After this, we offer some suggestions that the Commission appears to not have considered. These recommendations include policies that may help achieve the same goals, but at reduced cost or more educational freedom for students or educators.

[3] APA Consulting, Final Rpeort of the Study of Adequacy of Funding for Education in Maryland,  November 30, 2016, http://marylandpublicschools.org/Documents/adequacystudy/AdequacyStudyReportFinal112016.pdf

[5] Senate Bill 905, Commission on Innovation and Excellence in Education

Kirwan Commission on Education Puts Government Too Far into Classrooms