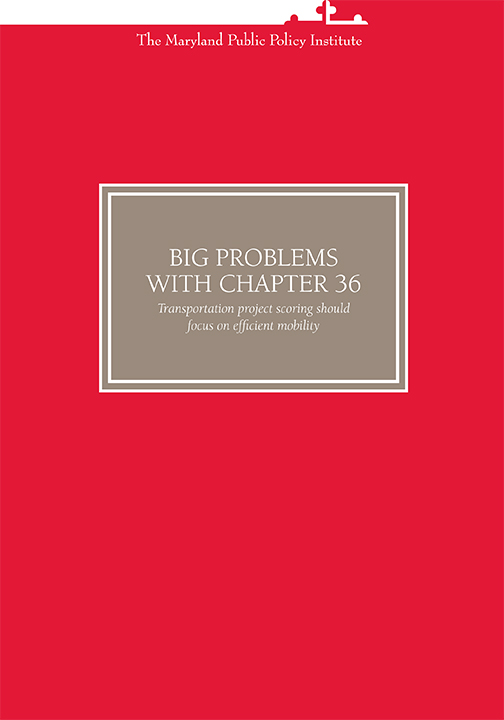 Prioritizing proposed transportation projects using an objective, analytical scoring system makes good sense in principle. But Maryland’s new scoring law, Chapter 36, constitutes a misuse of this principle. In their zeal to emphasize a few questionable policy goals in the scoring system, Maryland lawmakers lost sight of the central rationale for transportation projects, namely to support efficient mobility, enabling us to get ourselves and our belongings where they need to go speedily, conveniently, reliably, and efficiently. Chapter 36’s scoring system is heavily biased toward a small number of commuter-oriented transit trips at the expense of roads, which serve about 90 percent of the trips taken in Maryland. Further distortions are introduced by the law’s requirement that projects be weighted by the populations of the counties in which the projects would take place. This would concentrate virtually all of Maryland’s transportation money in just four of the state’s 24 political jurisdictions.

Transportation project scoring continues to be a highly divisive issue in Annapolis. Republican Gov. Larry Hogan and his supporters have dubbed Maryland’s new Chapter 36 law “the Road Kill Bill” because it would block funding to scores of road projects around the state in favor of a handful of big-city transit projects of debatable value. Chapter 36 supporters, including most Democratic legislators, respond that the law promotes good government, laying out a set of state goals and scoring proposed major capital projects, prioritizing the most deserving. They argue the law brings transparency and rationality to choosing major transportation projects. And if the scoring puts transit ahead of roads, then that’s what the “analytics” call for.

To Chapter 36 critics, predominantly Republicans, the law is little more than a scheme to concentrate big spending in solidly Democratic districts. Their Democratic opponents reply that the governor has the final say on transportation funding: he can disregard the scored priorities and elevate specific projects by simply explaining in writing the “rational basis” for those elevations. Hogan and his backers respond that this provision is meaningless because any such efforts would almost certainly be challenged in court.

As this paper goes to press, Governor Hogan and legislative leaders have struck a deal that would delay the use of the Chapter 36 process to allocate transportation money so that state officials can study the system more carefully and propose amendments. This is a good thing because, as we will see, Chapter 36 as currently written will yield poor project selections.