Burton Research and Strategies conducted a statewide telephone survey in Maryland that measured awareness and opinions regarding Maryland’s State Retirement and Pension System.  The survey was conducted January 4-8, 2021 among 502 registered voters, including 150 interviews with cell phone respondents.  The survey has a margin of error of +4.37%.

Currently, 29% of Maryland voters are very or somewhat familiar with the pension system, while 68% are not very or not at all familiar with it.Top voter blocs most familiar are state/local government employees, Baltimore City voters, and union households.

By a two-to-one margin (59% very/somewhat concerned – 30% not very/not at all concerned) are concerned about the state’s ability to fund employee pensions.This cuts across political party and geographic lines.

A large majority (75%) of Republicans support shifting future employees to 401K-style plans and one-half of Independents support (50% favor/31% oppose) the concept; while one-third of Democrats back the idea and nearly one-half oppose a shift.Surprisingly, a plurality of 18-34 year-olds and seniors are opposed to a shift though other age groups, especially voters between 45-64 favor shifting future public employees to a 401K-style plan. 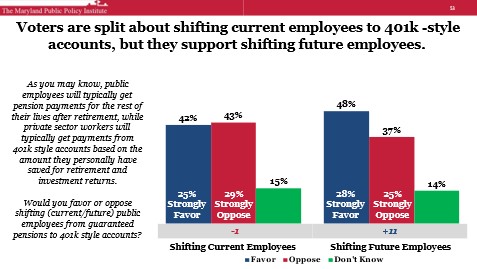 High levels of concern exist across partisan and geographic lines about raising taxes to fund pensions.  Concern levels among younger voters are divided (44% concerned/46% not concerned) but a majority of other age groups are all concerned.   Even a majority of state/local government employees and union members are concerned the state might need to raise taxes to meet pension obligations.

Large majorities of voters of all political stripes want to reduce the amount of money being paid to fund managers.Nearly sixty percent of Republicans and African Americans back requiring current employees to contribute more to their pensions and benefits.Finally, close to one-third of Democrats support raise taxes but among Democrats it is primarily driven by white Democrats (44%) while African Americans (25%) are less likely to support raising taxes.

There is virtually no support for reducing current employees’ future benefits, reducing spending on services, or cutting pension benefits for current retirees.