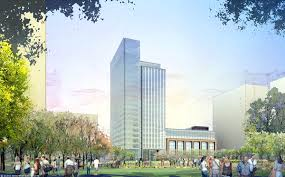 The next time you're out for a pleasant evening stroll on Lancaster Street in Harbor East, make sure you realize that you're in one of Baltimore's most impoverished neighborhoods. The man in the Armani suit walking out of a green glass office building and passing you by on the tree-lined brick sidewalk: he's a classic example of the working poor. The woman in the elegant dress leaving her black Audi with the restaurant valet: Obviously she can't even afford bus fare. The young couple in the osteria eating confit of rabbit leg with yellow polenta and Umbrian summer truffles: At least on this night they won't go to sleep hungry. The luxury condominiums are really slums, and the 30-foot yachts swaying ever so gently in the slips must be part of an aquatic shanty town.

Or so Michael S. Beatty and the Baltimore Development Corporation successfully convinced many of our elected officials into believing.

Mr. Beatty is the president of Harbor Point Development Group LLC, and he has big plans for a mixed-use project on 27 acres of prime waterfront real estate on an empty peninsula just south of Lancaster Street. But projects of this size — or any other for that matter — are often nonstarters in Baltimore City since the property tax rates are prohibitively high.

Luckily for Mr. Beatty, property tax rates that are more than double the rate in any Maryland county apply only to regular Baltimoreans. Wealthy, well-connected developers play by an entirely different set of rules with a willing hand from of our civic leaders.

For his Harbor Point project, Mr. Beatty has already secured nearly $113 million in tax credits, $88.4 million of which are in the form of an Enterprise Zone (EZ) tax credit. By law, a development is eligible for an EZ tax credit if it comes in a high-unemployment, high-poverty, and low-income area or if it comes in an area plagued by population loss and "chronic abandonment or demolition of property." As a nice walk down Lancaster Street indicates, Harbor Point meets none of the criteria. The peninsula is completely surrounded by the waters of the harbor and the vibrant neighborhoods of Fells Point and Harbor East. (The latter, of course, was a Beatty and John Paterakis collaboration that benefited from tens of millions of dollars in direct tax breaks from the city.)

With a little creativity and some assistance from his friends at the Baltimore Development Corporation, Mr. Beatty was able to score EZ eligibility by connecting Harbor Point to poor areas away from the water.

Now Mr. Beatty is pressing the council to sweeten his deal even more: He wants $106.9 million of tax increment financing (TIF) for Harbor Point. A TIF can be a complicated financial arrangement, but basically Mr. Beatty wants the city to borrow $106.9 million and fork it over to him so that he can build "public infrastructure," some of which normally is financed by local governments (like roads and utilities) and some of which might be better classified as recreational improvements that could just as easily be financed and owned by Mr. Beatty's development group (like a waterfront promenade, piers and open spaces among glitzy new buildings).

Mr. Beatty is smart to make sure that on paper the city maintains ownership of the infrastructure financed through the TIF: In calling a skyscraper's well-manicured front yard a "public park," that portion of the property comes off the tax rolls, cuts the assessed value of the skyscraper, and avoids millions of dollars more when the property tax bill comes due.

True, in accordance with the TIF, Mr. Beatty is promising to repay the full $106.9 million once his latest plans come to fruition. But he's promising to repay with property tax payments that his developed property would have owed anyhow. Moreover, the public hasn't been told how much it will actually cost Mr. Beatty to build all this infrastructure, so it's hard to believe that he's simply hoping to cover his costs without pocketing even more cash.

Defenders of special treatment for big-time developers claim that projects like Harbor East and Harbor Point accrue benefits that eventually trickle down to more modest communities. But in Baltimore the massive tax breaks are like water: They mostly seem to flow downhill toward the harbor.

Michael Beatty himself is on the record as saying that there should be "an equal playing field for everybody." For now he's happy to use much poorer people to win sweet deals that those poorer people can't even dream of obtaining. And sadly, City Hall seems happy to let it happen.

Louis Miserendino is director of the McMullen Scholars Program at Calvert Hall College High School and is a visiting fellow at the Maryland Public Policy Institute. His email is louismiserendino@gmail.com.