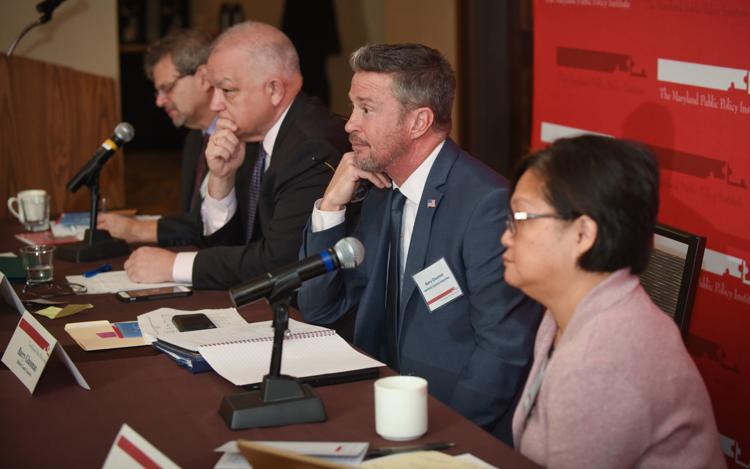 Originally published in the Herald-Mail

Panels discussed these issues ahead of the General Assembly, which convenes Jan. 8 to April 6, 2020.

The panel discussing the Maryland Commission on Innovation and Excellence in Education, known as the Kirwan Commission, focused largely on how to pay for the estimated $4 billion a year proposal.

Moderator Josh Kurtz opened the discussion, saying that “the battle lines are drawn” between the governor and the legislature, with the focus in the upcoming session focusing on “a very small universe of persuadable legislators.”

The governor’s budget chief criticized the cost of the Kirwan recommendations. David Brinkley, Secretary of the Department of Budget and Management, said that the Commission provided “no clear plan to pay” for policy implementation.

Brinkley said that the possible course of action of passing policy reminded him of the Bridge to Excellence in the Public Schools Act of 2002, known as the Thornton plan, which he said was passed without specifics about how to fund it. “Do you hear history repeating itself?” he asked.

Panel member Barry Glassman, Harford County Executive, said that while “there is no greater mission” than educating children properly, the Kirwan Committee based its recommendations on “rosy assumptions.”

Glassman criticized the assumptions made by the Committee that counties will be able to fund current increases in spending by the same amount through 2030. The state education funding burden, 50% of which is paid locally, will create an increase in responsibility to the counties, in addition to other budget responsibilities like pensions that the state has already passed on, according to Glassman.

Glassman continued that any spending mandated by Kirwan would press rural counties — including the nine Eastern Shore counties — whose ability to tax is already maxed out. Currently, all Maryland jurisdictions meet spending expectations except Baltimore City, Prince George’s County and Montgomery County, a trend Glassman predicted would be true with higher maintenance of effort demands.

He said that the biggest driver of cost is the increase in teacher salaries, including raises for teachers and increasing the number of teachers needed to meet the policy goals. Glassman also said the proposal ignores the diverse nature of communities in Maryland, and that “what’s good for one might be bad for another.”

Kirwan Commission member Joy Schaefer described the process that the Commission used to identify appropriate academic goals for Maryland, the most likely economic areas for success in the state and how the system to achieve those goals could be created and funded. She said that the Commission “Looked at high performing systems and Marylandized them.”

Schaefer agreed that longer economic forecasts tend to be less accurate, but that the education funding question was the most important priority for the upcoming legislative session.

The panel on Opportunity Zones focused on explaining a program that aims to incentivize developments in economically distressed communities.

The Opportunity Zone program, which the Hogan Administration plans to implement at least one of in every jurisdiction in the state, uses a federal framework to determine areas where investors benefit from tax breaks for funneling money towards business and property development in areas of acute need.

“It’s very hard to invest in communities that haven’t been invested in for years,” according to David Rosen, CPA and author of “The Book of Qualified Opportunity Zones.” Rosen explained that the purpose of the program is to give enough incentive to balance the risk on deals investors would typically bypass for a safer options.

The panel on the legalization of recreational marijuana, made up of two state lawmakers and a policy expert, agreed extreme caution must accompany any effort to legalize it because of the complexity of the issue.

Sen. Christopher West (R-Baltimore County) expressed serious concerns about the public health and law enforcement aspects of widespread legalization, as well as limits on marijuana taxes as a revenue generator.

West described how the lack of technology to determine whether drivers are under the influence limited the ability of police to reliably enforce laws. West drew a comparison between Maryland and Colorado because of their similar population sizes and the fact that Colorado has an established recreational marijuana industry. He said that and uneven and optimistic estimation of net revenue would at best provide minimal funding for other state programs while exposing Marylanders to increased health risks, particularly for recreational users under the age of 25.

Delegate Kathleen Dumais (D-Montgomery County) reiterated the complexity of the issue, explaining that taxing the industry and figuring out how to license and oversee growers and dispensaries has already proven difficult in other states with legal medical and recreational use.

She pointed to difficulties in the implementation of Maryland’s medical marijuana law, including failures to license the mandated number of minority-owned dispensaries. Dumais said that beyond the public heath and legal implementation components of the debate, criminal justice reform requires prompt attention. Reducing the black market, the possibilities of criminal expungements, and the updating of current drug laws pose challenges for lawmakers pursuing a coherent and comprehensive policy.

Ulrik Boesen, senior policy analyst for the Tax Foundation recommended that the possibility of recreational legalization should be approached with “extreme caution” and that the state could not count on tax revenue from marijuana to fund any other initiatives like education.

He explained that the legal marijuana markets are notoriously volatile and hard to predict, and he reviewed the mixed results of all eight states with recreational marijuana. The only takeaway, according to Boesen, is that all states were off on their predictions, and that states had difficulty taxing the industry enough to cover enforcement costs while keeping the price low enough to encourage growers, sellers and users to avoid established illegal markets.

Dumais and West agreed that while legislation was not going to be ready for the 2020 session, they expected ongoing discussion on the topic.

Commerce Secretary Kelly Schulz spoke about the Hogan administration’s work in enlarging the industrial base in the state, the forthcoming creation of a state level official charged with promoting entrepreneurship and small businesses, and the successful establishment of the Tubman Trail, an accomplishment she described as an important historical project that has taken more than 10 years to achieve. Schultz emphasized the business-friendly climate in the state.

“‘Maryland, Open for Business’ is not a slogan, it’s something we’re dedicated to every day,” Schulz said.

She said that the legislature should revisit last year’s minimum wage law, and she talked with business owners who are already limiting their workforce in anticipation of minimum wage laws by not filling open positions.