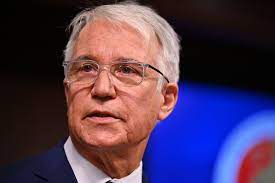 As a matter of both law and good policy, the California State Court of Appeals well served the public by ruling on Thursday that left-wing Los Angeles District Attorney George Gascon actually must do his job.

Gascon, one of a bevy of district attorneys elected with financial support from radical financier George Soros or his affiliates, is turning Los Angeles into a crime-infested danger zone, with homicides at a 15-year high. This matches the experience of most Soros DAs and those who adopt similar policies, with murder rates or violent crime rates likewise rising in Philadelphia, St. Louis, Chicago, and elsewhere.

All these prosecutors openly boast that their goal is to cut incarceration numbers and sentence lengths in the name of mercy and “equity.” Never mind the lack of mercy for the victims of the increase in crime that naturally follows from letting hardened offenders walk free.

At issue for the California appeals court was a “special directive” announced by Gascon ordering deputy district attorneys not to follow the state’s “three strikes” law that mandates a prison sentence of 25 years to life for someone convicted of a third serious or violent felony. Californians enacted the law by a statewide referendum with the unambiguous language that the sentence "shall be" imprisonment for at least 25 years and that prosecutors "shall plead and prove all known prior serious or violent felony convictions." Nonetheless, directly and openly flouting that law, Gascon ordered a blanket policy of refusing to enter the prior convictions into the record.

When sued by the county’s Association of Deputy District Attorneys, Gascon made two arguments. He claimed the law violated his discretionary powers as a member of the executive branch of government and thus violated the separation of powers. He also argued, as a policy matter, that the reason he wanted discretion was that “there is no compelling evidence” that longer sentences “improved public safety,” but that they have “contributed to prison overcrowding … [and] exacerbated disparities in the justice system.”

The California appeals court made mincemeat of the constitutional separation-of-powers argument. It did so on the basis of California law, but its reasoning should apply nationwide. Amid a much lengthier (and entirely convincing) discussion of the issue, the court wrote that the district attorney “is an elected official who must comply with the law, not a sovereign with absolute, unreviewable discretion.”

This is a lesson all U.S. governmental executives, from mayors up to the president, must heed: If a constitutionally passed law says “shall” or “must,” an executive cannot ignore it.

Gascon isn’t simply wrong about his legal duties, though. His policy choices are catastrophic as well, and his claims about the worthlessness of tough sentencing are ludicrous.

For the quarter-century before California voters enacted the three-strikes law in 1994, the rate of violent and property crimes exceeded 5,000 per 100,000 California residents. It cannot be entirely a coincidence that the rate then dropped precipitously, to just 3,000, within five years and had dropped to near 2,000 by the time Gascon took office. Almost immediately upon his election, that good trend reversed.

A comprehensive 2008 Santa Clara University study, even after controlling for pre-existing crime trends and economic, demographic, and policy factors, found that although there is considerable legitimate debate about the financial costs versus its benefits, “the presence of a Three Strikes law appears to be associated with slightly but significantly faster rates of decline in robbery, burglary, larceny, and motor vehicle theft nationwide.”

“Only a tiny fraction, as low as 1% of the population, commit most crime, especially violent offenses,” said Sean Kennedy, a California native who is a renowned crime policy analyst and visiting fellow at the Maryland Public Policy Institute. “Critically, criminals often escalate the seriousness of their offenses toward acts of violence over their criminal careers until they are ‘incapacitated’ or imprisoned for lengthy terms.”

Gascon and his fellow Soros DAs are wrong about their legal obligations and tragically wrong in their policy choices. Courts should rein them in, and voters should evict them.