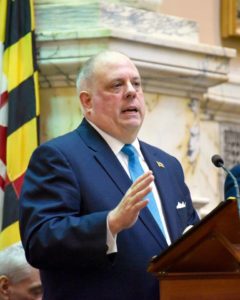 Larry Hogan is a rare bird:  not just a Republican governor in a deep-blue state, but a popular one in a political culture that often labels Republicans (and not just Donald Trump) as evil.

That the Guv faces a challenging political environment was made clear at many points during his 2020 State of the State Address.  You might think that someone with a 70% approval rating would be received enthusiastically.  You would be wrong.  No, nobody tore up Mr. Hogan’s speech, but after he moved beyond his acknowledgements of sympathetic personages of the past or present and spoke of policy matters, the temperature in the room got cooler.

Often, Democrats sat on their hands or “golf-clapped” grudgingly.  They could not have made it more clear that they consider themselves not just in charge but the exemplars of policy virtue.  As Delegate Terri Hill (D., Howard County) sourly explained on MPT afterward, the governor is “a nice man” who “doesn’t get it.”  Worse was Sen. Jim Rosapepe (D., Prince George’s and Anne Arundel Counties), who – with a straight face – blamed Baltimore’s crime surge on Mr. Hogan.

So it’s understandable that Mr. Hogan is a “hold the line” governor; it’s apparent that he and his staff believe that bold policy initiatives are a bridge too far in this environment.  Facing a veto-proof Democratic majority, policymakers in the Hogan administration have adopted a “first, do no harm” approach, trying to red-light bad Democratic policies more often than pursing meaningful change.  This strategy is not transformational but, rather, “preservational.”

Even at that, however, the governor seems unwilling to spend much political capital keeping Marylanders safe from powerful interest groups.  When discussing the Democrats’ single most important and damaging initiative this session, the budget-busting, parent-disempowering Kirwan school plan, the governor declined to take a strong stand.  The sum total of his remarks on Kirwan:

“I stand here today ready and willing to continue working alongside you to ensure that every single child in our state has access to a great education, regardless of what neighborhood they happen to grow up in.  But instead of continuing to simply debate how much more we should spend, let’s have productive discussions about how we can hold local school systems accountable for the billions of state tax dollars we are already investing, and let’s make sure those dollars are getting into the classrooms where they belong.  Our bipartisan efforts should have one simple goal, and that is achieving better results for Maryland’s children.”

Lots of buzz-phrases that poll well, but I fear the substance translates as “throw me a bone on accountability, and I’m ready to roll over on this.”  If so, that would be a tragedy for Maryland’s students and taxpayers and a shocking power-and-cash grab by the “Education Industry Complex” of teachers unions and bureaucrats.  The Kirwan plan deserves a fight this session, but it appears that after first arming himself for battle the Guv has decided to negotiate a truce – and not in a good way.  I hope I’m wrong.

On the plus side, Mr. Hogan recognizes that Maryland’s tax system leads to “gray flight,” and he has rolled out a plan to do something about it.  By exempting withdrawals of retirement funds from state tax, as many other states do, his “Retirement Tax Reduction Act of 2020” will induce quite a few retirees to re-consider their exit strategies.  The break is aimed chiefly at retirees of modest means – those with annual incomes below $50,000 would pay no state tax, with the exemption shrinking thereafter and disappearing entirely at $100,000.  Of course, not-yet-retired taxpayers and businesses should be asking “what about addressing my plans to flee?”

The retirement carve-out would cost $1 billion over five years.  Alongside a possible Kirwan spending tsunami, Mr. Hogan also promises $3.9 billion to fund the “Building Opportunity Act of 2020" that he says “will enable us to fulfill every single request from every single jurisdiction [emphasis added] in the state for new school construction and for upgrades and repairs to aging schools.”  To which a cynic might say “wait ‘til you see next year’s requests!”

Also on this session’s agenda is new spending for crime programs and infrastructure improvements – though Pimlico was not mentioned – and much else.  So… a billion here, a billion there – soon you’re talking about real money.

Taxpayers, therefore, must be wondering when these budgetary chickens will come home to roost.  Mr. Hogan has a great deal of budget authority that he seems reluctant to use.  It’s arguable that many Maryland Democrats gave him enough votes to win election not just to be “a nice man” who is popular, but to act as a real check on the spendthrift instincts of those in their party.  They likely expect and want him to use that authority even if it costs him some approval points in the polls.  In what’s left of this session, it would be nice to see signs that those expectations will be met.

Stephen J.K. Walters is the author of Boom Towns: Restoring the Urban American Dream and is chief economist at the Maryland Public Policy Institute. Email him at swalters@loyola.edu.