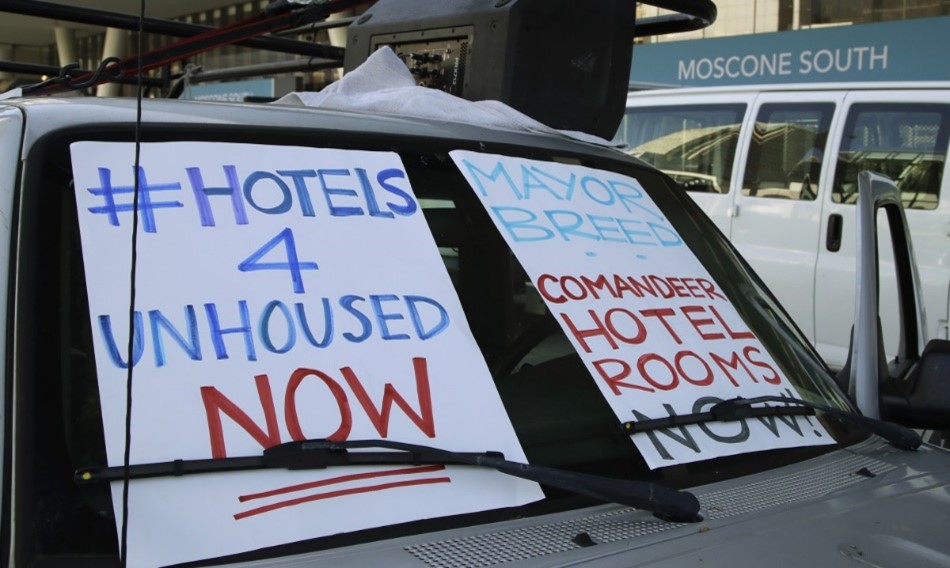 Baltimore mayor Brandon Scott loves to “re-imagine.”  Whether he’s talking about crime, budgets, or schools, that word is his mantra.  His handlers must have told him that voters think it means they’re going to get something new and successful in a city that’s getting way too accustomed to failure.

As often as not, however, Mr. Scott simply means he’s going to embrace another progressive fad, whether there’s any evidence that it actually, you know, works.  So it is with His Honor’s latest idea:  to buy some downtown hotels to house the city’s homeless.

As it happens, another city by a bay already has been experimenting with this approach (as part of California’s "Project Roomkey").  How has that been working out in San Francisco?

San Francisco launched Project Roomkey last year, ostensibly as a way to thwart the spread of Covid-19.  At last count, approximately 8,000 people live on San Francisco’s streets, and starting in April 2020, a few thousand were routed to leased “shelter-in-place” (SIP) hotels and motels.  However, since so many were living outside as a direct result of substance use (or mental illnesses associated with or exacerbated by it), lethal drug activity flourished in and around the buildings.

Then came the body count.  In 2020, San Francisco saw 713 fatal drug overdoses, mostly from fentanyl.  Nearly three-quarters perished while isolated inside the hotel rooms and supportive housing provided by the city.  Six died in the Hotel Whitcomb, a designated SIP hotel, in a single month.

Wow – just wow.  More people died from drug overdoses than from the coronavirus in San Francisco last year – and the great majority of them did so while housed in hotels and “supported” by city staffers supplying fresh needles, fentanyl foil, and other drug supplies.

But, hey, it could’ve been worse.  According to the New York Times, “the Drug Overdose Prevention and Education Project, an initiative funded by the city, gave out more than 50,000 doses of naloxone last year, said Kristen Marshall, the project manager.  About 4,300 overdoses were reversed using the lifesaving drug.  ‘We would have had thousands of dead bodies,’ she said.”  This is the “harm reduction” approach to drug addiction.  As Dr. Hali Hammer of the city’s public health department explained, “What we… are responsible for is preventing death by giving people the resources they need to use safely.”

But there’s abundant evidence that San Francisco’s homelessness policy is not only failing to prevent death, but spreading misery and blight.  Ms. Sandberg describes a walk through the city’s sixth district:

Block after block, you’ll see thousands of people who are barely alive.  Some are alone; others are piled on top of one another, running into traffic, or standing slumped over, unconscious.  They’ll be injecting or smoking heroin, fentanyl, and methamphetamine in front of you, unaware or unfazed by your presence.  Scabs cover their faces and bodies, limbs are swollen red and blue, often bloody and oozing pus.  You’ll notice the garbage, rotting food, discarded drug detritus, and feces surrounding them.  A shocking number are mere teenagers, but many are old or have aged well before their time.  Your immediate reaction will probably be grief and horror.  How can we treat our fellow human beings so cruelly, and how did we, as a society, allow things to get this bad?

The problem is not that San Francisco devotes inadequate resources to the linked problems of addiction and homelessness.  Its Department of Homeless and Supportive Housing will spend $852 million this budget year – over $100,000 per homeless individual.  The problem is that it spends this extravagant sum in ways that make the problem worse rather than better.

Initiatives like Project Roomkey come perilously close to "enabling behaviors," which the University of Pennsylvania Health System defines as “those behaviors that support our addicted loved one's chemical use.  By not allowing the addicted person to accept the consequences for their actions… by providing the pillow each time they stumble or fall… we are enabling their chemical use.”

In the words of Matt Haney, a City Supervisor representing the Tenderloin district, “If all you’re doing is handing out what someone needs to use, it’s tragically inadequate.  I can say for sure that what we are doing is not working and that it’s getting worse every single day.  I get offered drugs every time I step outside.  It’s overwhelming.”

And what should worry Baltimoreans is that these policies and their tragic consequences may be headed our way.  The City State’s Attorney has proudly proclaimed that she will no longer prosecute "low-level" crimes such as drug possession or attempted distribution, prostitution, or trespassing.  With the effective repeal of laws against such conduct, expect it to flourish – and for addiction, homelessness, and overdose problems to grow apace.  Then expect Mayor Scott to find that he can’t buy enough hotels to accommodate demand – at which point we can only hope he re-imagines his approach.