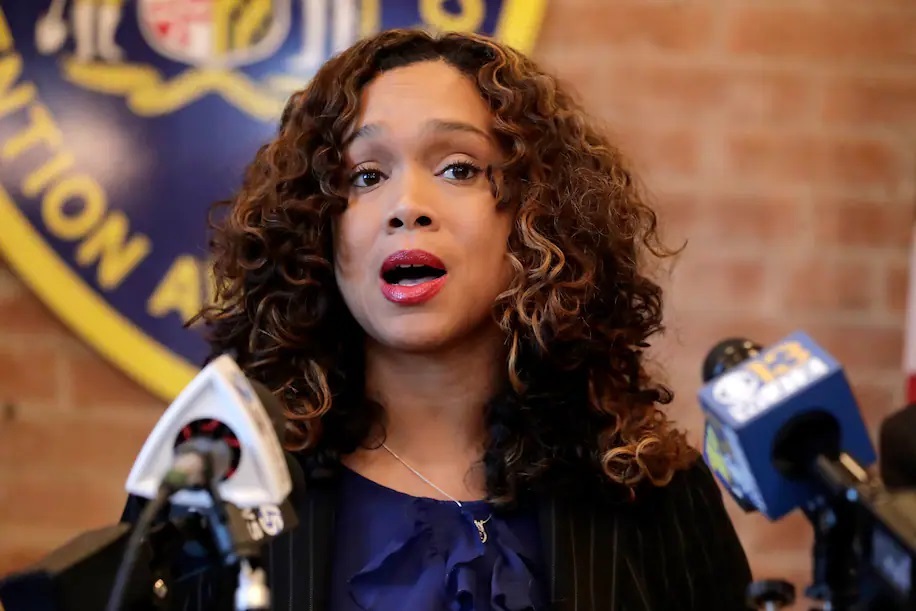 A Culture of Corruption

When sworn in as Baltimore’s state’s attorney seven years ago, Marilyn Mosby was the first of a new wave of progressive prosecutors. She might now be the first to take an early retirement—perhaps to a federal penitentiary.

Last week, the Justice Department indicted Mosby on perjury charges. She allegedly made false statements on key documents while chasing a quick buck in real estate in 2020, avoiding penalties and taxes on withdrawals from her retirement accounts by claiming Covid-related economic hardship but without actually suffering any layoffs or reductions in her $248,000 salary. Then she neglected to mention a federal tax lien while mortgaging two Florida properties, one of which has already sold for a tidy gross profit of $151,000.

Mosby gained national attention when she brought criminal charges against six cops (none convicted) for the death of Freddie Gray in 2015, and she has been in ethical hot water ever since. Her tax lien was a byproduct of unpaid taxes from 2014–2016. In 2018 and 2019, she went on 23 junkets to such locales as Kenya, Scotland, Portugal, and Germany on the dime of various advocacy groups, during which she was out of her office for 144 work days. Allegedly, she also failed to disclose some side businesses on ethics forms in a timely fashion and may have used campaign funds to pay her defense attorneys in violation of election regulations.

Even if acquitted of these federal charges, Mosby might be in trouble in June’s primary election. On her watch—a seven-year experiment with de-policing, non-prosecution, and de-carceration—Baltimore has become progressively more dangerous. Over 2015–2021, 2,332 Baltimoreans were murdered—a 50 percent increase above the previous seven-year period. The city’s current rate of 57 homicides per 100,000 residents per year is seven times the national average and exceeds the rates for countries such as El Salvador (52), Honduras (39), or Venezuela (37), from which migrants routinely seek asylum in pursuit of greater personal safety.

These terrible losses are inequitably distributed with respect to race, gender, and age. Last year, 92 percent of Baltimore homicide victims of known race were black; 46 percent were black males from 18 to 35 years of age, who make up just 8 percent of the city’s population. Assuming the victims of unknown race mirrored the known data, the homicide rate for this demographic was 347 per 100,000 population—slightly higher than the 335 per 100,000 killed annually in Operation Iraqi Freedom.

Since her indictment, Mosby’s public statements have not only proclaimed her innocence but also stressed her intersectional identity and invoked victim status—the twin trump cards of modern political discourse. It’s a savvy play. To get enough Baltimoreans to first acquit and then reelect her, she needs to be seen not as a money-grubbing house-flipper but as a crusader battling the evil forces that hold her people down; the attacks against her must be a “witch hunt” orchestrated by those trying to preserve a white supremacist, patriarchal status quo.

In reality, a culture of corruption is Baltimore’s status quo. Two of the city’s last five mayors exited office in scandals; Mosby’s defenders would point out that both were black women. But two male police chiefs (one black, one white) have done time for tax-related offenses; a comptroller got a suspended sentence over theft of tax funds; and a state senator and delegate from city districts were guilty of bribery.

The same day Mosby was indicted, an independent investigative team issued a report detailing the Baltimore Police Department’s long and sorry tolerance of dirty cops. Since 2018, when the city’s Office of the Inspector General became independent of the mayor, more than 20 city employees have been criminally charged or forced to resign for ethical wrongdoing, including the heads of the transportation and human resources departments and the director of the retirement system. One recent study ranked Baltimore second in the nation (trailing Richmond, Virginia) in the number of federal public corruption convictions over 2010–2019.

Many Baltimoreans hope the Mosby prosecution will be a turning point for the city. Even if she escapes a guilty verdict, her reelection bid should be a referendum on a don’t-sweat-the-small-stuff approach to law enforcement. Progressive prosecutors who don’t pursue charges for crimes such as drug possession or distribution, trespassing, petty theft, or prostitution argue that doing so carries no public-safety benefit and inequitably burdens minority populations. Mosby frames her alleged transgressions the same way, as mere paperwork problems. But tolerating the small stuff—whether it’s crime or corruption—invites more of it and risks escalation. Baltimore’s tragic decline is evidence that refusing to fix “broken windows”—and, indeed, tolerating them in City Hall—is a recipe for disaster.

Stephen J. K. Walters is the author of Boom Towns: Restoring the Urban American Dream, a fellow at the Johns Hopkins University’s Institute for Applied Economics, Global Health, and the Study of Business Enterprise, and chief economist at the Maryland Public Policy Institute.

Note: This article was originially published in City Journal.