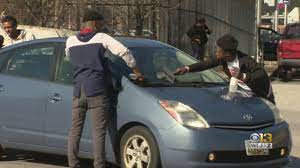 The day after he allegedly killed a motorist at an intersection near Baltimore’s Inner Harbor, one of the city’s numberless “squeegee workers” turned 15. A week later he was arrested and charged as an adult with first-degree murder. In this tragic story there is much to learn about America’s ideological divide and political dysfunction, and how these forces are accelerating the decline of some of its once-great cities.

The victim in this case—48-year-old Timothy Reynolds—has been criticized for provoking the incident. Available video does not show what led up to Reynolds’s ill-fated decision to park his car and emerge with a baseball bat, or his initial approach to the squeegee crew. According to Baltimore Banner reporter Justin Fenton, the video “picks up with Reynolds walking away from the intersection. As he walks away, he points the bat at three squeegee workers, who are following him from about 20 feet away.” After momentarily disappearing from view, “the squeegee workers ‘seemingly surround him.’” Then, “Reynolds can be seen swinging the bat while running towards them. One squeegee worker appears to strike Reynolds in the head while Reynolds has the bat raised toward another worker. Three seconds later, that person pulled out a gun and started firing at Reynolds. One shot can be heard followed by four more in succession.”

In Baltimore, it has long been illegal to wander through traffic at stoplights and panhandle or clean windshields for cash. In the strict gun-control state of Maryland, it’s also illegal for anyone under the age of 21 to own a firearm, much less conceal and carry one without a special permit. In the never-never lands that progressive thinkers and politicians have created in cities like Baltimore, however, these are not really laws but suggestions. Marilyn Mosby, the city’s non-prosecutor, has also effectively repealed laws against possession and distribution of small amounts of drugs, trespassing, prostitution, or public urination and defecation. Even before her tenure in office began, city officials had punted on enforcing laws against dirt-bike riding, graffiti, and other “low-level” crimes.

Such policies have created a pervasive sense of disorder and threat, especially in Baltimore’s minority neighborhoods. This, of course, discards the wisdom famously articulated by James Q. Wilson and George Kelling in the 1980s that disorder breeds more disorder, and that strategies aimed at enhancing public order in a neighborhood can create a virtuous circle. Order maintenance increases residents’ sense of safety and, by engaging them in the habit of self-policing, itself reduces crime rates.

As criminologist Matt DeLisi has discussed in these pages, the fact that this “Broken Windows” theory appeared to invite a conservative approach to law enforcement provoked a furious counterattack among left-leaning academics and the media. Widespread misunderstanding of Wilson and Kelling’s work—which actually warned against indiscriminate, aggressive policing in favor of a “negotiated sense of order in a community”—led to some misapplications of the theory and made it easy to muddy the statistical waters on its effects. Among progressives, it is now dogma that the theory had at best zero, and at worst negative, effects on crime.

Baltimore represents an object lesson in what happens when that dogma becomes policy. The most obvious and tragic side effect of the city’s zero-prosecution policy for most drug crimes is its stratospheric homicide rate. Reasonable people will differ about the effectiveness of federal policy on drug use and distribution, but when a locality decrees that “the war on drugs is over” within its borders, as Mosby did, it invites a world of trouble. Eliminating the risk of prosecution for drug crimes within Baltimore’s city limits but not in the rest of Maryland (where drug arrests and homicides have remained roughly stable over the last decade) increases the profitability of the drug trade and invites more of it to locate in the city. Since competition for turf and profits in this trade frequently takes violent forms, this inevitably contributes to higher-level crimes and needless loss of life.

Criminals might logically assume that if lower-level crimes are being ignored, then more serious ones might be handled gently. They would not be wrong. Maryland Public Policy Institute researcher Sean Kennedy, who studied 110 homicide cases arising from January 2019 to July 2020, found that suspects in 77 of these had been previously convicted of a serious crime by Mosby’s office. Sixty-one of them (79 percent) faced statutory jail terms that should have kept them in prison beyond the date on which they allegedly committed the homicide.

But even if progressives continue to assume (erroneously) that Broken Windows policing has a negligible effect on crime rates, they should not ignore the consequences of disorder. As Kelling observed, “Strangers have to feel comfortable moving through communities for those communities to thrive. Order is an end in itself, and it doesn’t need the justification of serious crime.”

Again, Baltimore is Exhibit A. One recent Goucher College poll found that two-thirds of respondents feel the city is on the wrong track, and that 90 percent consider crime a major issue. One lifetime resident of a neighborhood near the city line said that “when I come out on my street, I can either make a right to go into the city, or a left to go into Catonsville. I never make a right because I’m afraid to get robbed again.” It’s easy to dismiss stories about threatening behavior by squeegee “workers” as isolated incidents. But they’re real, they’re common, and they do, in today’s parlance, make people feel unsafe. That will have a damaging effect not just on the psyches of those affected, but on a city’s long-term viability.

In the decade before the 2020 census, as Baltimore’s leaders tolerated progressively more disorder, the city lost 5.7 percent of its residents. Between that date and last July, the Census Bureau estimates that the city’s population fell another 1.6 percent; resident flight has accelerated to over 600 lost residents per month. Obviously, multiple factors fuel such an exodus: poor public services, high taxes, a pandemic-related “reset,” and more. But when nine in ten Baltimoreans list crime as a major concern, it’s probably at the top of the list.

This course is unsustainable economically. Many of a city’s costs—to maintain its public infrastructure, to honor its promises to pensioners, or to make bond payments—are fixed. With a shrinking population of taxpayers and a declining tax base, fiscal crisis is inevitable (consider Detroit’s experience a cautionary tale). The question is how long indifference to disorder—the failure to fix broken windows—will remain politically viable. San Francisco’s recent recall of its progressive prosecutor is a sign that even the bluest cities have their limits. Baltimore might also be pulling back from the brink: Mosby has lost her bid for reelection, finishing third in last week’s primary.

Baltimore’s congressional representative, Kweisi Mfume, recently advocated finding ways to clear street corners of panhandlers, prostitutes, and squeegee workers, saying, “the issue here is whether or not children are going to dictate the rules that adults have to live under.” Or, perhaps, die under.

Stephen J. K. Walters is the author of Boom Towns: Restoring the Urban American Dream and the chief economist of the Maryland Public Policy Institute.