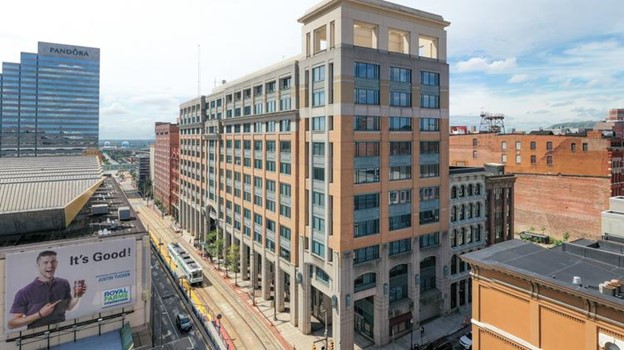 If you’re watching the canary in the coal mine that is downtown Baltimore, you might be getting worried. The birdie is starting to look unwell.

The latest unhealthy sign came at an October auction of what should be a stellar piece of property in the heart of downtown. The City Crescent Building, just 27 years old, sold for $23.95 million. That’s not as impressive as it sounds. Just a year and a half ago, it was assessed for tax purposes at $31.5 million, and in July 2017 at $57.3 million.

In just a couple of years, then, the minority-built Crescent — once heralded as a cornerstone of the city’s west side redevelopment — has lost 58% of its value and the city has lost $33.35 million of its tax base on a single parcel of land.

And this is not an anomaly. Thanks to the conscientious reporting of Melody Simmons of the Baltimore Business Journal, we also know that SunTrust Bank Tower sold in 2017 for $32.8 million, down $29.9 million from its 2007 value, and 25 S. Charles St. has seen its assessed value drop $18.7 million from its previous $42.6 million. If you’re keeping track, that’s $82 million up in smoke on just three parcels. More generally, market reports show that downtown rents on commercial property are no higher than they were 15 years ago — though the CPI has increased almost 40% in that time.

Even if you hate capitalists, all this should be cause for deep concern. The city government runs on taxes levied on physical capital (via its property tax) and human capital (via its piggy-back income tax). When you shrink your tax base by reducing the number or value of taxable capital assets, you’ll find it’s impossible to afford nice things like better-funded schools, safer streets, a horse track, a bigger convention center and much else.

Why this shrinkage? The Maryland Public Policy Institute has written abundantly that the city’s greatest systemic problem — the one driving its disinvestment crisis and population loss over many decades — is its non-competitive property tax rate. But that factor, as powerful as it is, has been a constant; it doesn’t explain much of the dramatic turnaround in these downtown values.

What clearly has changed in Baltimore in the last few years is its commitment — or lack thereof — to public order. Talk to anyone who lives, works or just passes through downtown, and you will hear complaints about aggressive panhandlers on the sidewalks and in the streets, squeegee kids importuning motorists at numerous intersections, encampments of homeless and graffiti “tagging” of buildings and even public signage.

It’s therefore common to say that downtown is “out of control.” That’s surely an exaggeration — and it’s clear that Baltimore is not nearly as bad in this regard as, say, San Francisco. But our common areas are indeed used in ways that just a few years ago would have been impermissible and now are sacrosanct. To suggest otherwise — to endorse enforcement of laws limiting the “free speech” rights of panhandlers or squeegee kids or the right to camp on public property — is to criminalize poverty or homelessness, and therefore a reason to cancel whoever would utter such retrograde ideas.

To be truly progressive rather than just nominally so, however, we need to get past that attitude. Signs of surface disorder breed more damaging forms of behavior, as the social scientists James Q. Wilson and George Kelling taught us. Their “broken windows” analogy — that leaving one window broken in a building is a statement that no one cares and thus an invitation to break others — was a cornerstone of New York City’s renaissance, which leveraged maintenance of public order in small things (like eliminating graffiti and turnstile-jumping in subways) to kick off a virtuous cycle that greatly reduced incidence of larger crimes.

A disorderly downtown sends a similarly unwholesome and unmistakable message. Aside from encouraging disorder elsewhere, it damages the city’s tax base and its ability to pay for the goods we want and need from local government. This canary is on life support. Question is, will Baltimoreans have the wisdom and courage to rescue it?

Stephen J.K. Walters is the author of "Boom Towns: Restoring the Urban American Dream" and chief economist at the Maryland Public Policy Institute. Email him at swalters@loyola.edu.