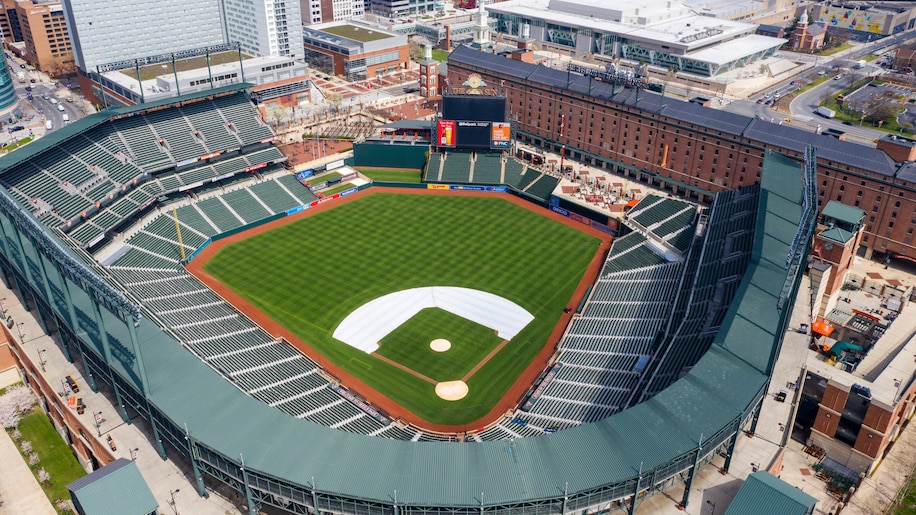 Let there be baseball in Maryland

Maryland Gov. Larry Hogan (R) has earned good reviews for his leadership during the novel coronavirus pandemic, but even those squarely in the guv’s corner must have wondered whether he was flexing too much authoritarian muscle when asked about the possibility that Major League Baseball could start its season at the beginning of July. “We own Camden Yards,” Hogan said. “And M&T Bank Stadium. So I’m the largest sports landlord here in our region. We, the governors of all the states, whether they own the facilities or not, will be the determining factor as to whether or not they are allowed to play sports.”

Not the most humble sound bite, but let’s assume Hogan means well. “It’s very likely that, no matter what kind of safety protocols they put in place, some players are going to be infected,” he explained. That possibility also weighs on players as they negotiate terms of a return to action. One has drawn a line in the sand: “For me to take a pay cut is not happening, because the risk is through the roof.”

But let’s get real: There are 1,200 ballplayers on big league rosters, and some are going to get infected whether they’re in uniform playing in empty stadiums or unemployed (and unchaperoned). The landlords, owners and players should first ask how many more will get infected at work.

Then there’s a bigger question: What real risk do these players face even if infected? Over the past couple of months, we’ve gathered some important data on how this virus works, and if you’re a healthy 20- to 40-year old (like just about every pro athlete), the numbers are pretty encouraging.

The most interesting information comes from serology tests, which detect antibodies to find out what fraction of the population has been infected by the coronavirus. Some such studies (including in California) used relatively small samples and/or tests with potentially high error rates, so using them to calculate an “infection fatality rate” or IFR (by simply dividing total coronavirus-related deaths by an estimate of the total infected) is controversial.

Spain, however, randomly sampled about 70,000 people and found that roughly 5 percent had the novel coronavirus antibodies. Dividing the country’s almost 28,000 death toll (as of this writing) by its estimated infected population yields an IFR of about 1.1 percent — many times higher than IFRs for the seasonal flu. The shocking thing, though, is how much coronavirus targets the elderly and spares the young. In Spain as of May 5, only 0.46 percent of the country’s coronavirus fatalities were for those between 20 and 40, while 24.8 percent of its fatalities were 70-somethings.

For perspective, estimated IFRs for seasonal flu typically range from 0.04 percent to 0.1 percent. So even if we double this 0.03 percent IFR estimate, it’s still in the ballpark of a seasonal flu risk for this 20-40 age group. Assuming Spain’s experience is typical, then, if every MLB player became infected, there’s less than a 1-in-3 chance of a fatality; if the infection rate is kept down by those safety protocols, the fatality risk is vanishingly small.

On the other hand, former Washington Nationals and current Houston Astros manager Dusty Baker is 70. Again, based on the Spanish data, the estimated IFR for his age group is 2.7 percent, 90 times higher than that faced by a typical player. So Baker might want to manage via Zoom from up in the press box.

The bottom line here is not, however, that ballplayers owe it to us to suit up and help alleviate the monotony of life under semi-lockdown. That’s totally up to them. Only they can weigh how much risk they’re willing to bear and how much reward they’ll demand to do so.

And that’s the key point: When we entered this crisis, no one knew much about the risks the virus posed, so an abundance of caution was warranted. But in the months since, we’ve learned a lot — though by no means all we need to — and our approach must change. Blanket edicts must give way to a tailored regulatory approach, giving individuals more latitude to weigh risks and entrepreneurs more freedom to design ways to serve them safely.

Only a foolish landlord thinks he should control every aspect of his tenants’ behavior.

Stephen J.K. Walters is chief economist at the Maryland Public Policy Institute and the author of “Boom Towns: Restoring the Urban American Dream.”

Image: Oriole Park at Camden Yards is closed on what would've been Opening Day in Baltimore. (Steve Helber/Associated Press)