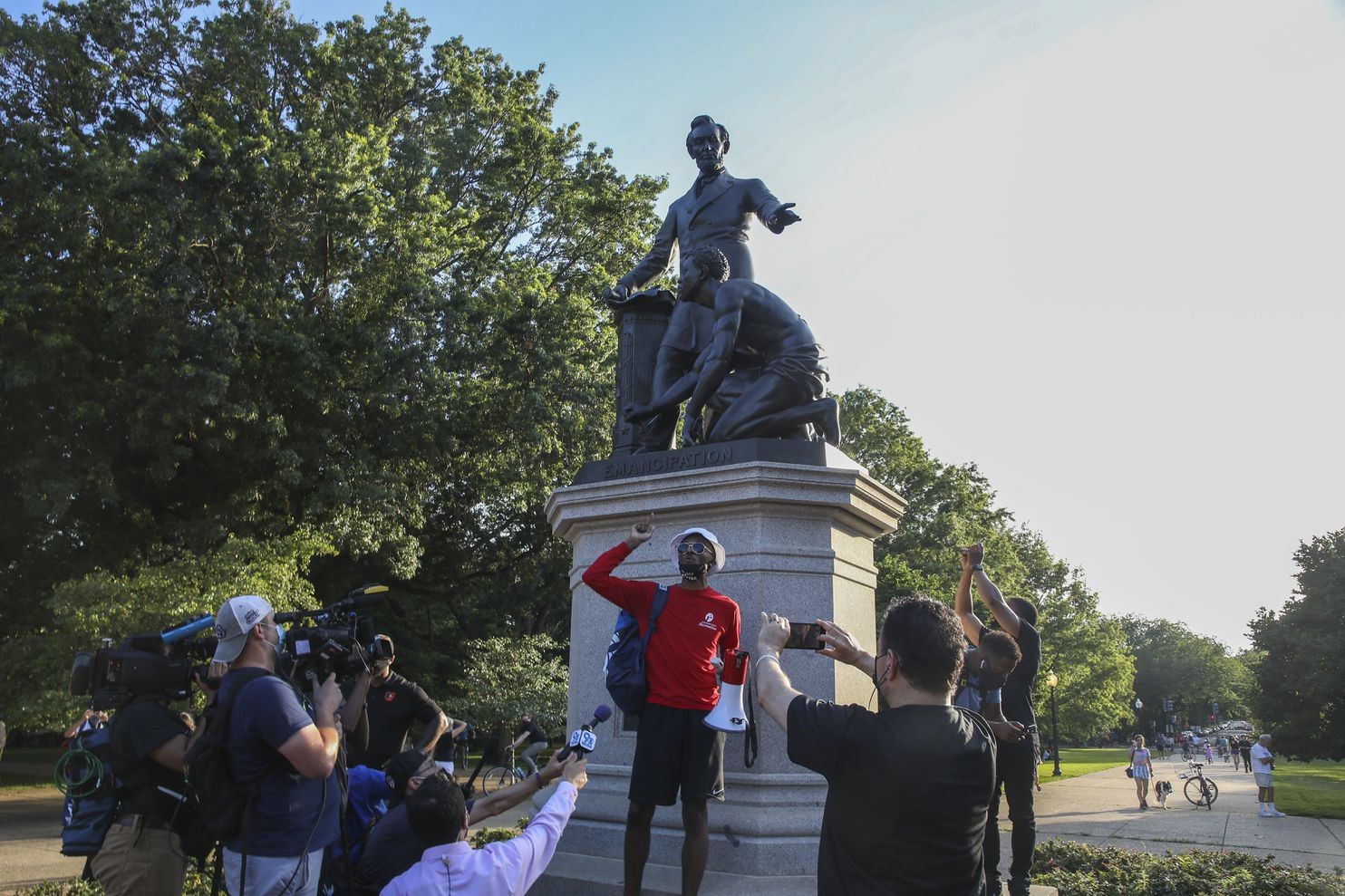 Lincoln Park’s memorial to the Great Emancipator should stand

A few blocks from my house stands a bronze monument to Abraham Lincoln, flanked by trees in a bustling park. But a vocal few — armed with bullhorns and invective — now threaten to forcibly topple it after 144 years.

The silent statue’s only crime is that it is misunderstood by its detractors.

The truth is much more complicated, beautiful and, yes, painful than that.

But the oblivious and the obliterators are dead-set on tearing it down.

Del. Eleanor Holmes Norton (D-D.C.) recently tweeted, “The designers of the Emancipation Statue in Lincoln Park in DC didn’t take into account the views of African Americans. It shows. Blacks too fought to end enslavement.”

Holmes Norton is wrong on a number of counts and right on others.

It was a poor, recently freed enslaved woman, Charlotte Scott, who, distraught over Lincoln’s assassination in 1865, declared, “Colored people had lost their best friend on earth … I will give five dollars of my wages towards erecting a monument to his memory.”

Scott’s request and contribution to the Western Sanitary Society, a charity run by white abolitionists for freedmen and Union veterans, grew as black Union veterans and freedmen exclusively gave thousands more to the project.

The society described the exuberance: “In the fullness of their hearts the colored soldiers would push out their last ‘greenback,’ saying, ‘Take it all.’”

So, contrary to claims that African Americans had little involvement, they, and especially black Union veterans, led the charge to see Lincoln immortalized in the park.

White abolitionist preacher Rev. William Greenleaf Eliot was determined to realize the project and found a white American sculptor, Thomas Ball, who had a sculpture model of Lincoln that Eliot noticed.

Ball donated his services of turning the sculpture into a full-size bronze at cost, so the freedmen’s funds were sufficient. But Eliot insisted the original design be altered. He wanted the freed slave to be an eager participant in his own liberation, and the shackles were made broken to represent the end of bondage.

Additionally, Eliot wanted it to depict the likeness of man he admired, a former enslaved person and friend of his named Archer Alexander. Eliot wrote a biography of Alexander and said of him, “I never knew a man, white or black, more thoroughly Christian … in all conduct and demeanor.”

Alexander is the freed man coming up from bondage. And if observers look closely, they recognize Alexander’s position is active, face turned upward. He is not kneeling but crouched, with one knee up, another tucked below, his right hand clenched in a fist.

Congress appropriated the funds for the pedestal to finish the project.

Filmmaker Ken Burns reflects on James Baldwin's understanding of liberty, and how our most venerated monuments can remind us of where America falls short. (The Washington Post)

At the later dedication of a replica in Boston, the day’s program described the sculpture’s intent: “In the original the kneeling slave is represented as perfectly passive, receiving the boon of freedom from the hand of the great liberator. But the artist has justly changed all this … by making the emancipated slave an agent in his own deliverance. He is represented as exerting his own strength, with strained muscles, in breaking the chain which had bound him.”

On the day the statue was unveiled, a crowd of 25,000 gathered, black and white. Supreme Court justices, Cabinet officials and the president shared the park and the day with freedmen.

And the great thinker and orator Fredrick Douglass dedicated the statue in a blistering and beautiful reflection on Abraham Lincoln. Douglass castigated Lincoln fiercely yet praised him mightily. And with remarks clearly targeting officials in attendance, he savaged the backsliding on race in the United States in the years since the Civil War’s promised equality.

Holmes Norton and other critics claim without strong evidence that Douglass criticized the statue’s design in his remarks, but there’s scant evidence for such. No contemporary account or documents produced by Douglass reflect this, and his public critique of Lincoln in front of the adoring crowd was otherwise unsparing.

The only “proof” that Douglass disapproved is a reprinted letter by a witness, paraphrasing Douglass four decades later, to a critic of the monument. It is hearsay, at best.

More than 350,000 Union soldiers died in the Civil War, 40,000 of them from Colored Troops regiments. Holmes Norton is right that black Americans were active agents in their own liberation and deserve recognition of their bravery and sacrifice. But that does not require diminishing the sacrifices of others who fought, were wounded and killed in pursuit of an America free from the scourge of slavery.

The history of the statue does not relieve us of our obligation to look upon it and its meaning critically, but it does require us to view it with complexity. The statue itself reflects the fraught relationship America had and continues to have with race.

Destroying the Freedmen’s Memorial does not change the past. It serves only to blind us to its triumphs and tragedies.

In these tense times, Lincoln’s salving words should be heeded: “We are not enemies, but friends. We must not be enemies. Though passion may have strained, it must not break our bonds of affection. The mystic chords of memory will swell when again touched, as surely they will be, by the better angels of our nature.”

Sean Kennedy is a resident of Capitol Hill and visiting fellow at the Maryland Public Policy Institute, a nonpartisan think tank based in Rockville.