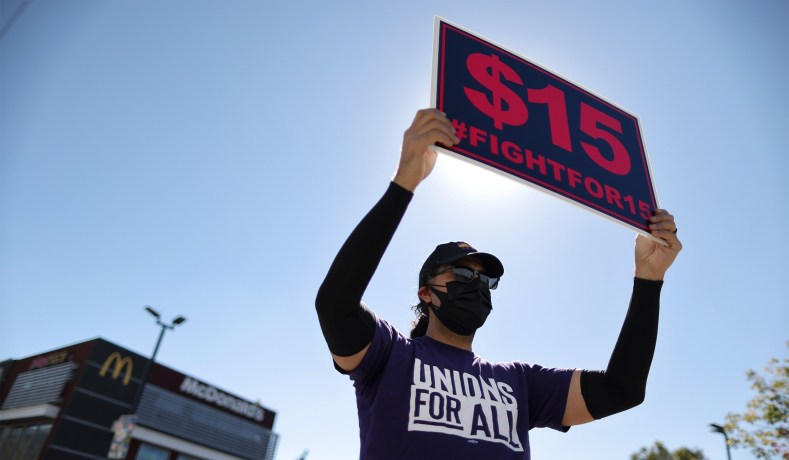 A man holds up a minimum wage sign at a rally held by fast food workers and supporters in Los Angeles, Calif., February 18, 2021. (Lucy Nicholson/Reuters)

I was 14 when I got my first real job. A restaurant in downtown Boston paid me $1.60 an hour, the minimum wage at the time. I wasn’t worth it — at least for a while.

On my first day as a busboy, during the lunch rush, I dropped a large aluminum tray laden with crockery and glassware onto the tile floor. The resulting explosion of sound likely startled people as far away as Nantucket; diners’ heads whipped around in unison, eyes wide in panic. As I ducked out of view, the manager hustled over, counted the broken pieces, and informed me he’d deduct it from my check. But he didn’t fire me.

His patience paid off. Soon my productivity improved as I developed some skills. By the end of that first summer I was scrambling eggs in the morning, assembling BLTs during lunch, and serving root-beer floats at the soda fountain in the afternoon. And was rewarded with a nickel-an-hour raise.

That money mattered: my parents okay’d my choice of a Catholic high school (instead of our town’s “perfectly fine” public one) as long as I kicked in half the tuition. But the experience mattered far more. Not so much the training as a short-order cook — though, surely, it’s good to know how to feed one’s self and others — but the bigger lessons. How to handle the stress of that daily lunch rush; to deal with difficult situations and people; to team up to get a job done. Perseverance. Resilience. Adaptability.

Most especially, I acquired some self-esteem. I wasn’t just getting a gratuitous pat on the back from a teacher or a participation ribbon from a coach. I was earning a paycheck; producing something of real value. Pulling my weight.

These days, as the “Fight for $15” rages on, I wonder how many young people will be robbed of that kind of experience if we price them out of entry-level jobs. Unfortunately, many such jobs don’t add $15 an hour to an employer’s revenue stream, so they’ll simply go away. According to the average estimate of the non-partisan Congressional Budget Office, a $15 minimum wage will mean 1.4 million fewer jobs in 2025.

Of course, progressives commonly argue that more than doubling the federal minimum wage will, in the words of Treasury secretary Janet Yellen, cause “very minimal” job losses. And given the difficulty of sorting wheat from chaff in social-science data, one can find research supporting that hope. But the most complete analysis of this literature, by David Neumark and Peter Shirley of the University of California, Irvine, shows that about 80 percent of the studies done on minimum-wage hikes find negative employment effects; there’s a one-in-a-million chance that so many researchers would come to this conclusion if the effect were truly negligible. Neumark and Shirley conclude that the Fight for $15 would yield a 16 percent decline in low-skilled employment.

In true “you have to break some eggs to make an omelet” fashion, progressives also argue that the trade-off here is worthwhile. Since more people will get a raise than will lose their jobs, they see it as a win for “social justice.”

Kicking one of every six unskilled workers to the curb in order to raise the incomes of the rest is, however, a terrible trade-off economically, socially, and morally. The discarded — assuredly the least skilled, least educated among us — will suffer grievous harm. And there is, in fact, an alternative policy to improve the living standards of the working poor without costing any of them their jobs.

When I think back to my diner days (or to my later summer job in a tin-can factory), I can remember quite a few people who would have been collateral damage in an earlier Fight for $15. They were decent and hard-working; all were proud to be pulling their weight. None deserved to have their sense of self-worth shredded by a well-meaning but misguided public policy. While an ever-expanding welfare state might support the newly idle, the emotional toll of separation from meaningful work can be devastating. If we want more “deaths of despair” among the less skilled, pricing them out of the labor market will make it happen.

And we can enjoy an omelet here without breaking any eggs: We just have to expand the Earned Income Tax Credit program instead of distorting labor markets with an arbitrary wage control. Under current law, a single mother of one earning $9 an hour in full-time work gets a federal credit of $3,628, an effective raise of 19 percent. In a state with its own EITC like Maryland, she’d get an additional credit of $1,814, raising her after-tax hourly wage 29 percent, to $11.62. If, instead, her employer is required to pay her $15, her job is very likely to disappear.

It’s certainly arguable that the EITC can be improved in order to better reward work and reduce income inequality. What’s inarguable is that it provides a path to higher living standards for low-skilled workers without endangering their jobs — and that’s a true win for social justice.