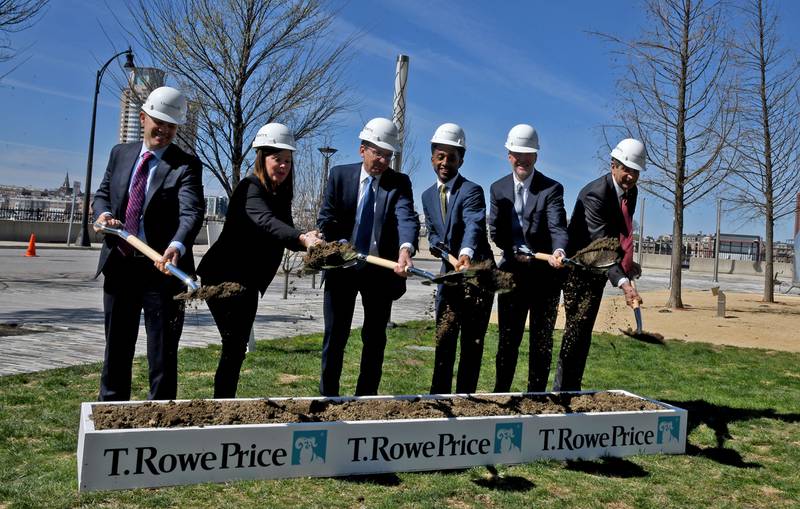 Mayor Brandon Scott joins representatives from T. Rowe Price and others at a groundbreaking ceremony for the start of construction of the new 555,000 square foot global headquarters of T. Rowe Price. March 28, 2022. (Barbara Haddock Taylor).

Renew Baltimore will not give up in our efforts to make Baltimore’s property tax system more equitable, reverse flight (600 residents leaving each month) and end our disinvestment crisis. But after reading the editorial board’s latest broadside against our effort (“Property tax cut failed, but goal of addressing Baltimore’s housing inequities? Let’s make an offer,” Aug. 3), we may have to give up trying to convince The Baltimore Sun Editorial Board of its flawed reasoning.

Most unfortunate is that The Sun employs so many populist dog-whistles in defense of what is an obviously failed tax policy. If the goal is to divide and conquer, then phrases like “favors the rich,” “self-interested” and “affluent” to describe Renew’s plan or those who favor it — 9,500 signatories on deadline day, over 10,000 as this is written — may seem useful but are disingenuous.

The truth is that defending the status quo preserves inequity and repels the kind of investment that is at the heart of a healthy urban economy. Anyone who understands public finance economics knows that high property taxes damage property values and penalize investment. Our calculations show that every dollar invested in high-tax Baltimore carries a 17% penalty relative to investments in the surrounding, lower-tax Baltimore County. In our majority-Black city, current tax policy is a key obstacle to Black wealth creation and an instrument of systemic racial injustice. That truth is undeniable whether spoken by a Black former City Council member or a white resident of Roland Park.

History shows that trying to remedy this unfair system with vague promises about “gradually” cutting Baltimore’s non-competitive rate never generates the level of investment hoped for because city leadership can’t be trusted to consistently deliver. Attempts to double-down on “focused” and therefore discriminatory cuts are also insufficient and, yes, inequitable.

Need we remind that the city’s own development arm, Baltimore Development Corporation, has advocated precisely what Renew Baltimore’s petitions would require? In its “Baltimore Together: A Platform for Inclusive Prosperity” proposal, BDC asserts that “A key step is to develop a plan to reduce real property taxes and codify it in the Baltimore City Charter through a referendum.”

In less than two months of canvassing, Renew Baltimore all but achieved this objective and forced public officials to envision a Baltimore with a more competitive and equitable property tax structure. We engaged many thousands of city residents and business leaders, presented to community associations and activated a broad contingent of volunteers who support what we’re determined to accomplish. By no means is this a “fizzle.”

The writers are the founders of Renew Baltimore.

A new group wants to slash Baltimore’s property taxes in the name of equity. City Hall calls it ‘absurd.’