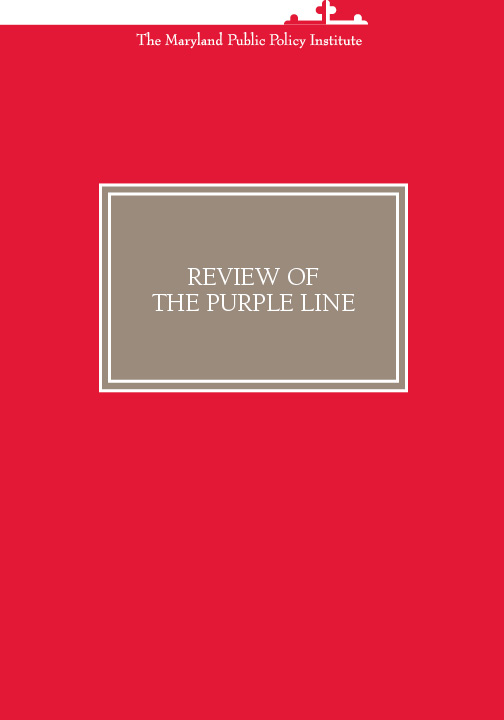 Review of the Purple Line

Maryland's proposed Purple Line is currently expected to cost about $2.44 billion for 16.2 miles, or $151 million per mile.[1] This is not only more than the average for non-subway lines; it is more than eight times as expensive, per mile, as America's first modern light-rail line, which San Diego opened in 1981. Built without any federal funds, that line cost less than $10 million per mile ($17 million per mile in today's dollars).[2]

Since then, the federal government has helped fund the building of almost every new light-rail line in the country, and, not coincidentally, the costs have rapidly grown. Light-rail projects in the Federal Transit Administration (FTA) 1997 New Starts report—the agency's annual recommendations for which rail projects deserve federal funding—cost an average of $40 million per mile, which is about $55 million in today's dollars, or more than three times the per-mile cost of the San Diego line.[3]

These rapidly rising costs raise an important question for both rail advocates and supporters of the Purple Line: at what point does light rail become so expensive that it is not worth building? As the Seattle underground line indicates, rail advocates seem to think there is no practical limit. Yet this paper will argue that we passed that point long ago, and the Purple Line would not be worth building even at a far lower cost. Despite this, people continue to support light rail and the Purple Line, in part because some expect to make money at taxpayers' expense and in part because of a nostalgic view of the benefits of rail transit that overlooks the true cost.

Light rail is a high-cost, low-capacity form of mass transportation, which makes it an inappropriate solution for any American urban area. This paper will examine the Purple Line and show why its construction will do more harm than good to the communities it is meant to serve.

Study: Purple Line Could Do More Harm Than Good

The Purple Line? No thanks.

A New Transportation Plan For Maryland