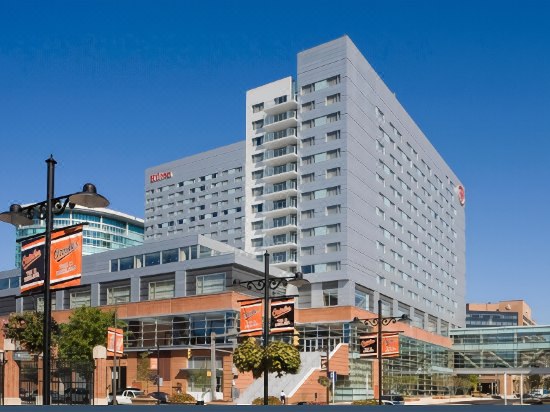 To err is human, to forgive divine. But to ignore an error or refuse to learn from it is, well, unforgivable. So let’s look at Baltimore’s decision to get into the hospitality business and invest in the white elephant that looms over Oriole Park at Camden Yards — the Hilton Baltimore Inner Harbor — and take some lessons.

Back in 2005, then-Mayor Martin O’Malley (D) decided that Baltimore really needed a big new hotel next to its convention center. This was billed as a “game changer” that would help reverse the city’s decline by luring more tourists downtown. And it would secure votes from construction unions, a nice side benefit for an aspiring governor.

We were warned, however: Private companies had been pitched the idea and declined. There were no signs of a shortage of hotel rooms in the area; adding more would likely be a losing proposition. Supply does not create its own demand.

Undaunted, the city borrowed $305 million and, by 2008, had built an immense view-spoiler anyway (seemingly hiring refugees from East Berlin to design it). At least city officials grasped that they knew zip about running a hotel (though one now operates a travel agency as a side hustle), so they signed Hilton to manage their “asset.”

The succeeding years have not been kind to the city’s purse. Over 12 years of operation, the Hilton has lost $81 million. The better news is that, in 2019, it managed to eke out a profit of $1.6 million.

On a $305 million investment, that is not just chump change; it is a mirage. Note first that the Hilton now has an assessed value of $170 million. When you turn $305 million into $170 million a few years later, you are acting out an old joke: “How do you make a small fortune? Start with a large fortune.”

Also note that there were much better uses for $170 million in Baltimore last year. City governments do not, of course, play the market — but when they claim large chunks of capital, they prevent others from doing so. Invested in the S&P 500 at the beginning of 2019, $170 million would have been $217 million by year end, a tidy capital gain of $47 million, 29 times the hotel’s actual return. That’s the true “opportunity cost” of this money pit.

Longer term, if we hadn’t thrown $305 million at a redundant hotel in 2008 but had put that sum into the enterprises that comprise the S&P 500, those investments would today be worth $744 million instead of $170 million. That implicit capital loss of $574 million is well over half a year’s property tax revenue and almost one-and-a-half times Baltimore’s annual income tax revenue. We can only wonder about the social returns on much-needed alternative investments in crime-fighting or schooling.

And, last year, the economy was booming; this year, we have a pandemic and the Hilton’s operations were “suspended.” So the hotel is hemorrhaging red ink again, and the value of the city’s investment is flatlining. New York’s Times Square Hilton, also worth about $170 million pre-pandemic, has been discounted to a mere $61 million. There’s no reason to suppose Baltimore’s Hilton is doing any better, which means the city is way, way underwater on its hotel debt, perhaps to the tune of $200 million.

This is an epic fail, a catastrophic waste of scarce capital and a financial albatross for an economically struggling city. And it is just one example of how badly things often go when our elected officials try things they are ill-equipped to do. At the state level, for example, we have just committed almost $400 million to horse racing — a dying industry if ever there was one — to keep a one-day party in Baltimore rather than allow it to move to Laurel. The city not only grossly mismanages a water company but also tells far-more-efficient private managers to go away — forever. And so on, for office space, housing and much else.

There are, of course, systematic reasons for dysfunction in public enterprises. Absent a market-survival test or a profit motive, incentives for efficiency are weak; political objectives often get in the way. So elected officials should stick to their knitting. They should focus on public safety, education and transit — relying on private management and competition in as many areas as possible. They should not try to be business execs. They’re terrible at it. To pretend otherwise is to invite repeated Hiltonesque disasters.

Stephen J.K. Walters is chief economist at the Maryland Public Policy Institute and the author of “Boom Towns: Restoring the Urban American Dream.”