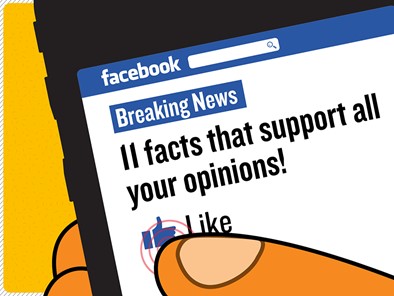 Get Out of Your Echo Chamber

In the aftermath of the disgraceful events of January 6, when we witnessed our soon-to-be-ex-President incite a riot on Capitol Hill, most Americans are wondering what we can do to heal the country and make it a better place.  Step 1, of course, has already been taken:  in November we turned out in record numbers to vote and took the reins of power away from a man who (especially or at least in recent days, depending on your point of view) has disgraced his office and, by his personal conduct and rhetoric, deepened our divisions.

But there’s something we can do on a day-to-day basis:  read things and consult media that do not merely confirm our biases but, instead, challenge them.  Dig for the truth, not just “your” truth.  In popular terminology, make sure the flows of information and opinion we rely on are diverse and inclusive.  This will require us to take control of our news feeds from the social media algorithms that are good at serving up what we want to hear rather than what we need to hear.

Here’s an example of how disinformation can warp our beliefs when we get our news from non-diverse sources that mostly echo and reinforce our interests and, yes, prejudices.  On the day of the Capitol Hill insurrection, our previous post criticized Maryland’s only Republican Congressman, Andy Harris, for his “enthusiastic embrace of the President’s fraudulent post-election allegations and strategy.”  This meant I spent a good part of the rest of the day responding to emails – most polite, some sneering – that defended those allegations.

Those messages often cited “evidence” that was clearly erroneous; crediting it could only be possible if one inhabits an echo chamber.  One correspondent, for example, asserted that there were “200,000 more votes counted in Pennsylvania than there are registered voters.”  This was easy to debunk:  there are, in fact, about 8.6 million registered voters in PA, and the presidential vote tally was a little over 6.8 million.  Turnout was therefore a commendable 80% rather than the absurd 100+% rate fantasized by my correspondent – who even got his conspiracy theory wrong.  The original story was that more votes were tallied in Pennsylvania than there were voters checked off as having voted – but that was because those who concocted the story used incomplete voter rolls; their figures were bunk.  Nevertheless, a few unfair, unbalanced media outlets and influencers passed them on.  The President tweeted the falsehood out; it was retweeted 117,000 times.  Misinformation fueled misunderstanding, outrage, division, and violence.

Which brings us back to Rep. Harris.  After the Capitol had been re-taken from Mr. Trump’s cadres, Mr. Harris voted to object to Pennsylvania’s electoral votes.  His reasons to do so were narrow and flimsy; over two months, they’d been tested in numerous failed lawsuits.  One Trump-appointed U.S. Circuit judge summed things up:  “Calling an election unfair does not make it so.  Charges require specific allegations and then proof.  We have neither here.”

Pennsylvania’s Republican senator Pat Toomey eloquently provided reasons not to object:   "We witnessed today the damage that can result when men in power and responsibility refuse to acknowledge the truth.  We saw bloodshed because a demagogue chose to spread falsehoods and sow distrust of his own fellow Americans.  Let's not abet such deception.  Let's reject this motion.”  But Mr. Harris ignored the words of one far better informed and wiser than himself; later, he even became embroiled in an angry confrontation with colleagues in the House chamber.

Mr. Harris embarrassed himself further on local television the following morning by passing along another conspiracy theory:  that the Capitol Hill violence was the work of infiltrators from Antifa and Black Lives Matter.  This myth was fueled by some fake news in the Washington Times that, to its credit, the paper soon corrected:  “Supporters of President Trump, including some who were part of the crowd Wednesday that stormed the U.S. Capitol, had claimed online that Antifa members had infiltrated their numbers.  The Washington Times erroneously reported late Wednesday that facial recognition technology backed up that speculation and identified two Antifa members.  In fact, XRVision has not identified any members of that far-left movement as being part of the attack.”

Let us all, then, make a New Year’s resolution that we will avoid what Nebraska Senator Ben Sasse (R) calls "clickbait crack" and kick our addiction to unhealthy social media sites and one-sided news and opinion vendors.  Whether we call ourselves liberals or conservatives, let’s diversify our thought portfolios and consult opinion leaders we expect to disagree with as often as we read those who make us say “right on.”  Let’s stop visiting sites that, as Sen. Sasse puts it, are “monetizing anger.”  It will not only be good for our blood pressure, but good for the country.