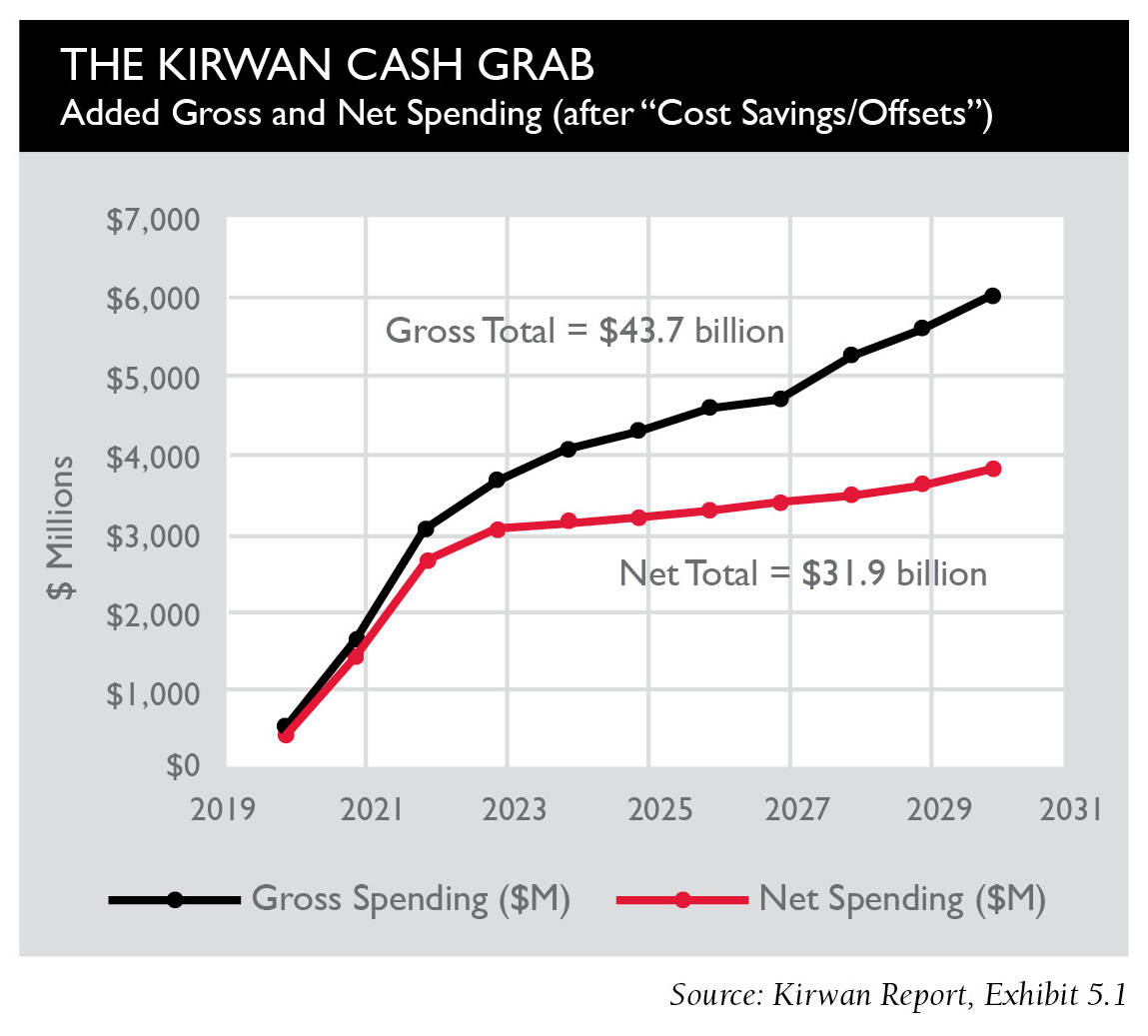 Supporters of the Kirwan Commission’s blueprint for education reform often say that the plan’s $4 billion cost is phased in over 10 years.  That’s partly true:  yes, there is a phase-in period.  If you’re a casual reader, though, you might take away the impression that the $4 billion number (though huge) is the total cost.  Which, spread out over a decade, ain’t so bad, right?

But that impression is wildly inaccurate:  The initial Kirwan report asked for a total of $31.9 billion dollars over the next ten years, starting out at about half-a-billion extra spending in fiscal 2020, rising to over three billion by 2023 and topping out in 2030 at $3.8 billion – an annual “investment” later revised upward to the aforementioned $4 billion figure.

And the $1.2 billion annual burden Kirwan would place on localities already has elected officials more than a little worried.  Baltimore City, for example, would have to double its local share of school spending (though it also hopes to cadge another half-billion annually from the state).  Since the city is already maxed out on its piggyback income tax rate, has a non-competitive property tax rate more than double that of surrounding counties, and (therefore) continues to lose population and see its tax base shrink, it is already desperately seeking new cash cows to milk – including by reneging on a deal it made to get payments-in-lieu-of-taxes from the city’s non-profits.

What’s worse is that even these enormous annual Kirwan costs likely understate the ultimate bill.  The fine print in the report reveals that the net costs are reported after deducting “Estimated Cost Savings/Overlaps” from the gross costs.  These are advertised at over $2.17 billion annually by 2030; the discussion is littered with qualifiers (see pp. 138-43) that make these “savings” seem more like vain hopes than promises.

In any case, when faced with Kirwan’s real costs, there is evidence that Marylanders are reluctant to buy what the “educators and experts” (really, teachers’ unions and ed bureaucrats) on the Commission are selling.  And they are correct to beware:  Maryland’s public schools already spend 22% more, and its teachers are paid 28% more, than the national per-pupil averages.

For this, Maryland students and their parents get disappointing results.  The latest National Assessment of Educational Progress scores were correctly reported as “devastating.”  Only 35% of state 4th-graders scored proficient in reading, for example; that’s on par with the national average but down from 45% in 2013 and 40% in 2017.

But between 2012 and 2017, while those NAEP scores were declining, statewide per-pupil spending increased by over 9%.  Now, after doing less with more for years, our public school monopoly seeks even more money.  It’s up to voters to tell their elected representatives whether they think that’s wise.