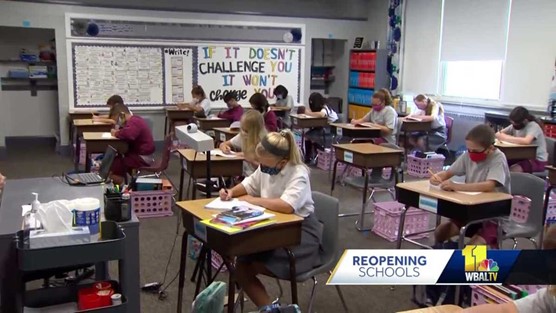 When it comes to our kids’ schooling, we Marylanders are not “following the science and the data.”  Instead, we’re getting pushed around by special interests that are failing to serve the best interests of students – especially poor and minority students.  The resulting delay in re-opening our public schools is just part of the story, and should point us toward thoroughgoing reform of K-12 education policy.

The best evidence that in-person and/or hybrid schooling is relatively safe comes from a dispassionate expert:  Emily Oster, the Royce Family Professor of Teaching Excellence and Professor of Economics at Brown University.  Prof. Oster and her research team have analyzed schools’ Covid data since the last two weeks of September (thus allowing enough time from schools’ August start-up to reflect possible transmission effects), focusing on those that use in-person and hybrid models.  Their key findings for public schools (with a total of 2.8 million enrolled students) as of 10/31:

As Dr. Oster sums up, “these numbers are not zero, which for some people means the numbers are not good enough.  But zero was never a realistic expectation.”  More importantly, zero is not what we’d see even if we kept all schools locked down, ‘cause people don’t live in hermitically-sealed bubbles.

In Maryland, where most public schools have been closed for the duration of the pandemic, we’ve nevertheless seen over 18,500 confirmed infections (and only two deaths) in kids age 19 and under.  That works out to 0.8 infections per 1,000 kids per two-week period during the eight months since Maryland recorded it first cases – which is the same infection rate that Dr. Oster’s team has lately detected for public school students in classes across the country.

So it’s a delusion that “distance learning” is safe while in-person or hybrid learning is not; both approaches carry some risk, and the risks may not be measurably different.  But keeping kids home carries huge costs.  Academic gains have been wiped out for many students and racial and economic gaps have widened, greatly reducing future earnings.  We’re also seeing adverse effects on students’ mental health and parents’ labor force participation.

But the false “risky-vs.-safe” narrative is so widely accepted that when NPR interviewed Dr. Oster, their reporter asked (dismissively) “I mean, if your data are right, why aren't more schools open? (Laughter).”  Dr. Oster was too polite to finger the real culprit and say “it’s the unions, stupid.”  In a study of over 800 school districts, each percentage point increase in union membership at the state level was associated with a 1.5 percentage point lower probability of reopening in person; no evidence was found to suggest that measures of local COVID-19 risk are correlated with school reopening decisions.

If there is a silver lining here, it is that parents are getting cheesed off – and perhaps motivated to seek meaningful change in education policy.  The defenders of the public school monopoly have long used students as bargaining chips in negotiations about funding, curriculum, district boundaries, and more.  “It’s for the children!” has been their mantra, false narratives their stock in trade.

In Maryland, that strategy was on display throughout the recent debate about the Kirwan Commission’s extravagant plan to “reform” K-12 education across the state.  To justify that $32 billion-over-ten-years cash grab, legislators and voters were told some whoppers.  That Maryland’s schools are under-funded; they're not.  That there’s inequity in the state’s allocation of school aid; there’s not.  Most importantly, that the schools’ problems will be solved only by throwing more money at them and granting the education bureaucracy more control.

In truth, improving public education and, especially, correcting the failures that hold back so many poor and minority students requires taking some control away from that bureaucracy and the teachers unions, and subjecting both to a healthy dose of competition.  More public charter schools and, yes, more vouchers for poor students would empower parents to seek schools that actually serve their kids’ best interests rather than the monopolists’ comfort.  Faced with the need to compete to survive, even those monopolists would find ways to step up their game.

We’d also see that better does not necessarily mean more expensive.  Baltimore’s Catholic schools are open now and many charge tuitions $10,000 or more below the per-pupil spending of most public systems.  Our Covid-related budget crisis requires that we get more bang per education buck; public charters and private schools already know how.

So when Maryland’s legislators re-convene in January and the monopolists' top priority is over-riding Governor Hogan’s veto of Kirwan, let’s hope some lawmakers decide that the days when they give ed bureaucrats and unions a blank check in Annapolis are over.  This will take political courage:  the unions distribute lots of campaign cash and promise lots of votes to certain legislative lap dogs.  But the parents of students currently so ill-served by the education status quo command many more votes.  Empowering them with a new plan to expand school choice should have broad appeal – and, ultimately, will truly be “for the children.”