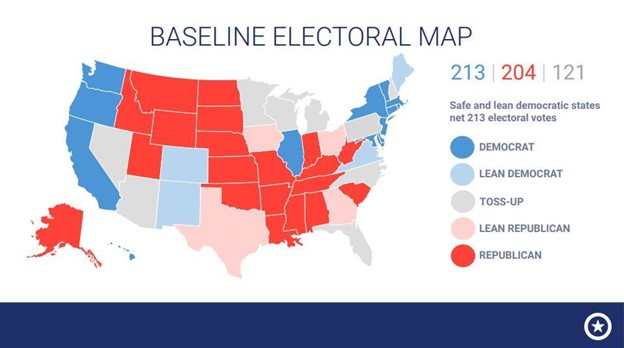 As this is written, votes are still being counted.  Accordingly, we should avoid acting as if all key races are settled (we have made that mistake before).  Nevertheless, some big-picture lessons can be drawn and discussed:

1. America is moderate; Baltimore is not.

Much has been made of the pundits’ and pollsters’ second successive crash-and-burn in this election.  There was supposed to be a Blue Wave and there was not.  Nationally, there was instead a strong message of moderation:  we voted to divide government power and repudiate extremes.

The only appropriate conclusion is that many opinion-leaders simply do not understand America and Americans very well.  They’ve absorbed narratives about the nature of this country and most of its people that are disconnected from reality.  They are entitled to their own opinions, but not their own facts.  It will be interesting to see if they go back to the drawing board and re-assess some fashionable theories about America, race, capitalism, policing, and much else, or whether they continue to sneer at those who do not share their immoderate views.

Locally, moderation is in short supply.  A very good man and eminently credible candidate, Bob Wallace, spent a lot of money and energy offering Baltimoreans a fine alternative to our not-ready-for-prime-time but very “progressive” mayor-elect; Mr. Wallace got just 21% of the vote.  Jovani Patterson, a solid alternative to a City Council President candidate who seems unable even to pay taxes or fill out required campaign documents on deadline, got just 19%.

The principle at work here is that birds of a political feather flock together.  Baltimore has long been a “progressive” city.  Its tax and regulatory policies have been repelling moderate residents and businesses for decades.  This has consolidated the power of progressive special interests – public employees’ unions, left-leaning foundations and activist groups – but doomed the city to a long, steady decline.  Which decline, of course, is invariably blamed by progressives on “structural racism” and historic injustices – all while other cities somehow manage to prosper and grow.  So solving Baltimore’s many problems is getting harder by the day.  Therefore, some voters might need to rethink their party allegiances in a surprising way – about which more will be said later.

In coming years, one hopes that Mr. Trump’s fundamental nature and his election in 2016 are put in proper perspective.  By training and experience, Mr. Trump is just a salesman and showman.  He won celebrity on shock-radio shows and (un)reality television by his willingness to say what is provocative and entertaining – whether or not that has anything to do with the truth.

That Mr. Trump navigated his way to the Republican nomination in 2016, and then, like a poker player drawing to an inside straight flush, squeaked through in the general election was much less reflective of his talent or the nation’s character than was widely believed.  It was a fluke, a quirk.  A majority of the public consistently disapproved of him – but he benefited throughout his maiden voyage into politics from an opposition party that scares some moderate voters even more than he repulses them.

Whatever the final outcome of the Presidential vote tally and Mr. Trump’s inevitable litigation barrage, it’s clear that the Trump Model – that politicians are a small step up from shock jocks – has no staying power.  An incumbent President who (thanks to tax and regulatory policies served up by a Republican Congress) compiled such a strong economic record should, even in the presence of Covid’s dislocation, cruise to re-election.  That he did not, while Republicans did well in Congressional and state races, sends a clear message about how Americans want their leaders to behave.

3. Baltimore Republicans and Independents need to alter their strategy.

The electoral message in Baltimore, unfortunately, is that changing course is hard.  Our mayor-elect won less than 30% of the vote in his party’s primary while a multitude of more moderate candidates (i.e., those less beholden to unions and leftist interest groups) divided the remaining super-majority.  Once the primary was over, however, all the Democratic winners were a lock in the general election.

So it might be time for the city’s 30,000 Republicans and 53,000 Independents to abandon principle in favor of pragmatism.  If the 2020 results illustrate anything, it is that only the Democratic Party and its 312,000 registered voters matter in Baltimore.  They’re unbeatable.  But if you can’t beat ‘em, maybe it’s time to join ‘em – and nudge them toward moderation.

Imagine adding as many as 83,000 center-right voters to the Democratic primary.  At the least, doing so would make endorsements from self-interested voting blocs like the unions far less important.  And it just might make every candidate more willing to think about truly changing the numerous policies that have led to the city’s sad decline.

The willingness of Messrs. Wallace and Patterson to try to save Baltimore from its own political dysfunction is a very encouraging sign.  It means there are many good, talented people who have not given up on the city.  But if they wish to effect real change, they may have to work within its “ruling class” rather than continue trying to defeat it.